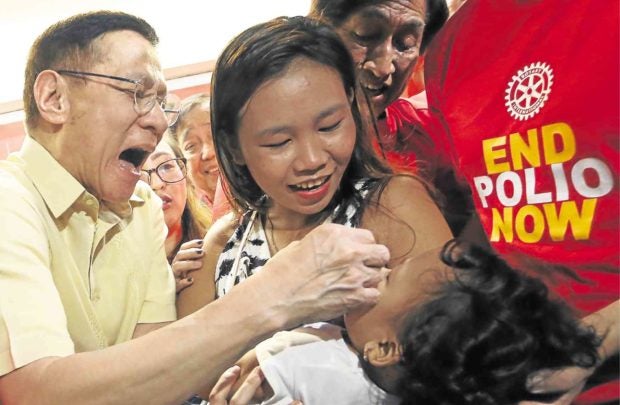 BACK ON TRACK Health Secretary Francisco Duque III administers oral polio vaccine during an inoculation campaign by the department and the Rotary International in Quezon City on Friday. —NIÑO JESUS ORBETA

MANILA, Philippines — The Department of Health (DOH) confirmed on Friday that it found a second polio case in Laguna province, more than 770 kilometers from the first case found in Lanao del Sur on Sept. 14.

Health Secretary Francisco Duque III said the case involved a 5-year-old boy who had a weak immune system and started experiencing the onset of paralysis on Aug. 25.

Duque confirmed the second case a day after he announced that a 3-year-old girl in Lanao del Sur was diagnosed with the disease, 19 years after it was declared eradicated.

Duque said the DOH would expand its inoculation campaign against polio to cover more than 5 million children nationwide next year.

But doctors raised concerns that the vaccine being given to children may not address the Type 2 strain of the vaccine-derived poliovirus that was found in both new cases.

World Health Organization (WHO) Philippines representative Rabindra Abeyasinghe clarified that Type 2 polio had “not been in circulation for so many years and has been defined eliminated.”

According to the WHO’s website, the transmission of the wild, or the naturally occurring, strain of the Type 2 poliovirus was successfully “interrupted” in 1999 leading to a change in 2016 from trivalent to bivalent vaccines, which only contained the Type 1 and 3 poliovirus strains.

Duque said that the emergence of the vaccine-derived polio may also be due to the low coverage of the oral polio vaccine (OPV).

“So this actually raises the issue: Where did this vaccine-derived polio come [from]?” Abeyasinghe said.

Moreover, the Philippine Society for Microbiology and Infectious Diseases (PSMID) feared that the Type 2 strain could have mutated over the last few years.

“Outbreaks usually occur in Third World countries that are thickly populated and where sanitation is very poor. The virus easily mutates in a place that is very dirty and where there are a lot of kids. That’s how the poliovirus [behaves],” former PSMID president Rontgene Solante said.

Solante explained that while the virus contained in the OPV was already weakened, a child may still get infected by it especially if he was unvaccinated or had a compromised immune system or lived in a dirty environment.

Currently, the Polio Eradication Initiative recorded five countries in Asia where there is an outbreak of polio: China, Papua New Guinea, Indonesia, Myanmar and now the Philippines.

There are people who oppose vaccines, called antivaxxers, who spread misinformation about vaccines and those who are afraid of vaccines because of the antidengue Dengvaxia controversy.

In the National Capital Region alone, OPV coverage has significantly dropped from 77.25 percent in 2016 to a dismal 23.45 percent in the second quarter of this year.

DOH data also showed that the number of cities and provinces at high risk of polio grew to 99 this year from just 52 last year.

Dr. Lulu Bravo, executive director of the Philippine Foundation for Vaccination, said that the measles outbreak early this year should have prompted the DOH to take action.

“It is so lamentable the way vaccination and public health programs have been damaged, causing the situation we are in,” Bravo said.

“At any time that vaccine coverage goes down to less than 80 percent, the risk of outbreaks of polio is high. DOH has the responsibility to keep the immunization high,” she added.

The DOH earlier said that since polio had not been seen in the country for nearly two decades, the vaccination against the disease had become a “victim of its own success.”

“If you don’t see the disease, you become complacent. They think it won’t come back, that it’s a disease long gone, like small pox, and [has] a low possibility of returning. So there’s a need to reeducate the public,” said Dr. Maria Wilda Silva, the DOH’s national immunization program manager.

On Friday, Duque signed an agreement with 10 Rotary clubs that have pledged to raise funds, mount various advocacy campaigns as well as commit volunteers to ensure that the country would reach the ideal 95-percent vaccination coverage.

Duque said that a total of P1.1 billion had been set aside for the supplemental OPV drive.