newsinfo / Headlines
Headlines
WITH GCTA REVIEW, ‘WE’D JUST HAVE TO WAIT, TOO’ 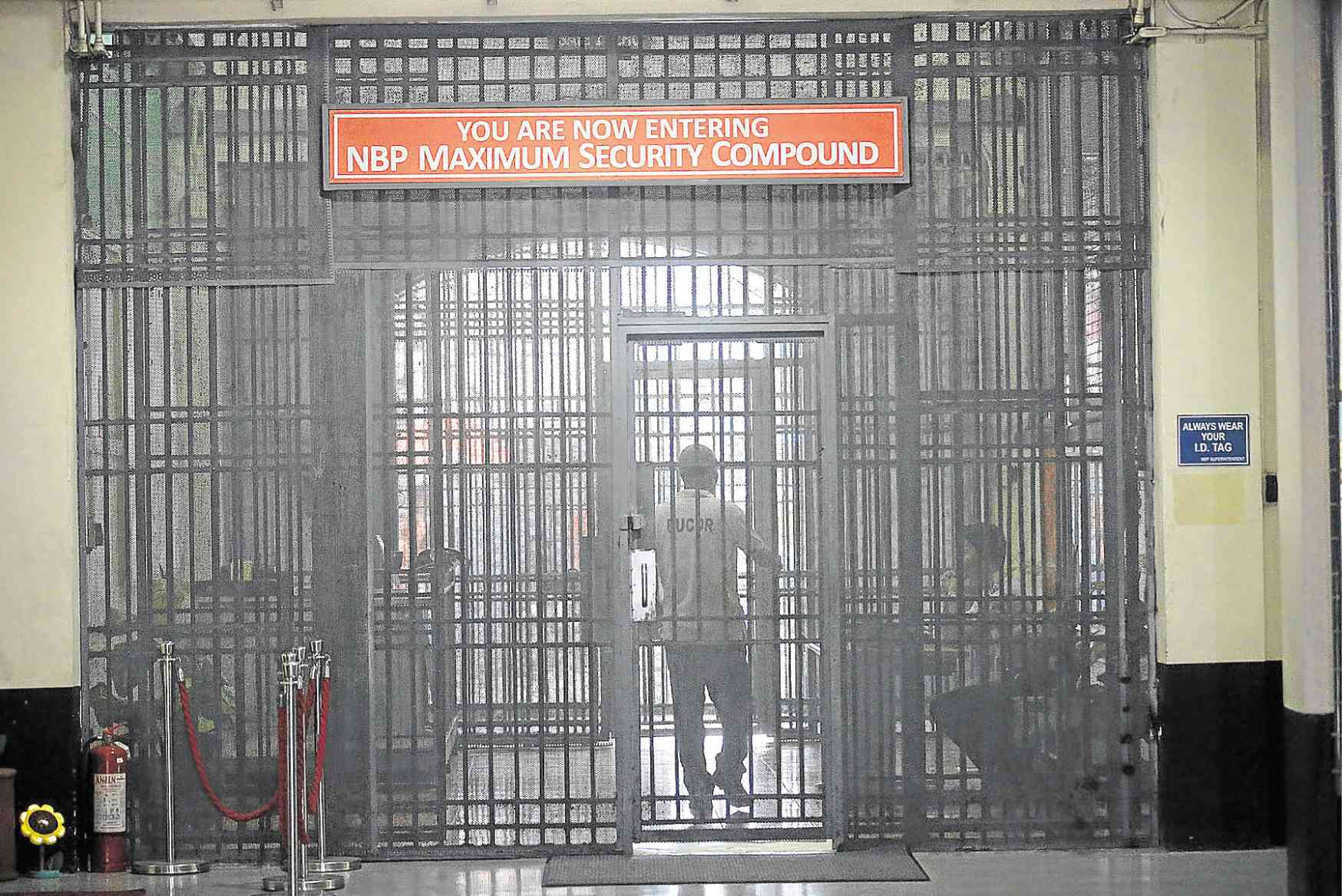 BEHIND BARS Bureau of Corrections personnel guard the gate leading to the maximum security compound of the national penitentiary in Muntinlupa. —GRIG C. MONTEGRANDE

SAN PEDRO CITY—The family of Nelson (not his real name) in Laguna province was looking forward to the day he would walk out of a penal farm in Mindanao as a free man ready to rejoin society.

With a cellular phone borrowed from a prison guard, Nelson called up his relatives in Metro Manila to share the good news.

His release papers were already signed and just needed to be submitted to the Bureau of Corrections (BuCor) in Muntinlupa City. He was next in line, along with a couple of prisoners from the Mindanao penal farm where he is held. It was only a matter of time.

“He always said the first thing he’d do [once out] was to see his wife and kids,” Nelson’s sister told the Inquirer. “We were all excited.”

The family had it all planned out for Nelson’s homecoming, assigning relatives to pick him up or with whom he would stay. An ex-convict at 47, Nelson doubted anyone would hire him so he planned to sell fish balls (street food) for a living.

It would have been his first shot at winning his life back but all hopes dimmed after the government suspended for review the good conduct time allowance (GCTA) law.

“[Nelson] said they were just told to wait and not to ask anymore questions,” his sister said.

The GCTA, the law that effectively reduced prison sentences, would have also afforded convicted rapist and murderer Antonio Sanchez an early release.

But soon after Sanchez’s release was aborted, thanks to public outrage, a slew of controversies in the prison system were unraveled.

BuCor officials were fired, a Senate investigation launched and the thousands of prisoners released through the GCTA ordered to return.

“When we heard about Sanchez, we were furious,” Nelson’s sister said. “Because of him, the release of all other prisoners, even those eligible, was stopped. Everyone now looks at them (convicts) collectively, the same, as if not a single one deserved a second chance,” she added.

But Nelson was a changed man, his sister insisted.

She said Nelson was only 19, a college dropout with a pregnant girlfriend, when he was duped by an illegal recruiter for a job abroad.

Nelson needed money to settle the debts he incurred for his placement fee.

It was in 1993 when Nelson and two other men kidnapped two schoolboys in Metro Manila in exchange for a P3-million ransom. One of the boys made it out alive and was able to seek help, but the other drowned in a river near where they were held captive.

Nelson was convicted and sentenced to 40 years in prison.

With kidnapping considered a heinous crime, Nelson was automatically disqualified for parole, his sister said.

His only ticket for an early release was the GCTA.

“That’s why many prisoners behaved inside, hoping to earn [time allowances]. They knew that [being confined in the] ‘bartolina’ (a dungeon, as punishment) would forfeit their [time allowance],” she said.

For Nelson, for instance, it meant four months off a year in his sentence. He studied under an extension school program in prison and even became an administrative staff of the school. He also performed other tasks in the prison kitchen.

From the national penitentiary in Muntinlupa, Nelson was transferred to the penal colony in 2014. The costs of traveling to Mindanao had made it impossible for Nelson’s mother, a rice cake vendor, to visit him since.

But from time to time, at no specific day, Nelson would call his estranged wife and children. If he were lucky, they also did video chats on borrowed phones in prison.

His sister said they were just waiting for another surprise call from Nelson. As to when he’s coming home, she said: “We’d just have to wait, too. That’s all we could do, anyway.”