PMA to file charges vs persons involved in death of cadet 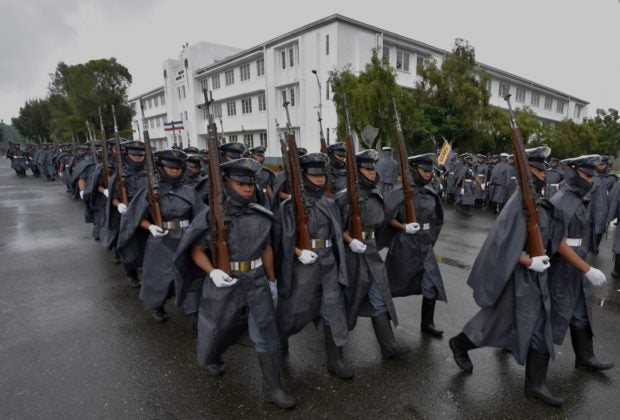 Melchor Hall is the oldest building at the Philippine Military Academy, which was designated a national historic landmark by the National Historical Commission of the Philippines on May 21, 2019. Melchor Hall was completed in 1949, a few years after the end of World War II. INQUIRER PHOTO/ EV Espiritu

MANILA, Philippines — The Philippine Military Academy (PMA) on Friday said it would file “appropriate charges and shall apply sanctions” to those who would be found responsible for the death of Cadet 4th Class Darwin Dormitorio.

There are three “persons of interest” in Dormitorio’s death, police said, and concluded that the cadet was a victim of hazing.

The PMA admitted that “a handful of cadets may have lost their way, and their appalling acts deserve utmost criticism and condemnation.”

“It is unfortunate that a life has been lost. We pledge that no stone will be left unturned. All perpetrators will be held liable to the full extent of the law,” it said.

The 20-year-old Dormitorio would have been a member of the PMA Class of 2023.

The country’s premier military training school also vowed to initiate changes to prevent a repeat of the incident.

“Such a distressing incident challenges us to ask ourselves on how we can be better as educators and trainers, as officers and mentors and ultimately as parents to our cadets… The adherence of the cadets towards the PMA character development across the four classes will be reviewed,” it said.

It added it will “enhance” the monitoring and reporting system on cadets’ overall well-being. /kga

PNP: Those responsible for death of PMA freshman will pay for crime