newsinfo / Nation
Nation
ALL IN ONE DAY: APPROVAL ON 2ND AND 3RD READING

House swiftly OKs P4.1-T nat’l budget for 2020 after only a month of debates 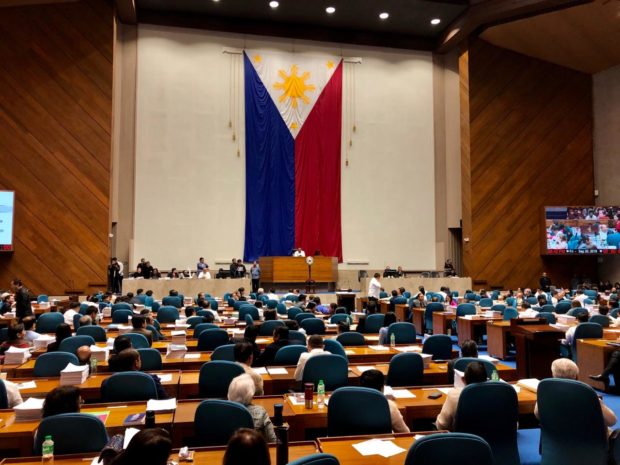 Some 263 House members stay at the plenary on Friday night to approve the proposed P4.1 trillion national budget for 2020. Pathricia Roxas/INQUIRER.net

MANILA, Philippines — Just a month since the executive branch submitted its proposed spending plan for next year, the House of Representatives on Friday already approved the P4.1-trillion national budget for 2020.

But some lawmakers denounced the hasty passage of the 2020 expenditure bill with Deputy Minority Leader and Bayan Muna Rep. Carlos Zarate saying the House had “sacrificed” proper scrutiny of programs and projects of the Duterte administration just to “railroad” its approval.

The chamber dominated by pro-administration lawmakers has approved House Bill No. 4228 or the 2020 General Appropriations Bill (GAB) on second reading and on final reading right after by a 257-6 vote.

Prior to this, the House formed a small committee that would collate, until September 23, and approve congressmen’s individual and institutional amendments to the budget bill.

Zarate, however, pointed out that even if President Rodrigo Duterte certified the budget bill as urgent it does not mean that the House should merely yield and recklessly cut the budget debate.

It took just a month for the House to approve the budget bill from the day the Department of Budget and Management submitted its proposed National Expenditure Plan to the chamber last August 20.

The House leadership originally aimed to pass the GAB on final reading by October 4 to prevent a repeat of the delay in the passage of the 2019 national budget caused by legislators fighting over alleged kickback-laden pork barrel funds.

In his speech after the budget’s approval, Speaker Alan Cayetano thanked his colleagues for passing a “quality people’s budget in record time.”

The House leader also enjoined his fellow lawmakers to submit their amendments to the proposed budget as he admitted that the expenditure plan for next year is imperfect. /kga