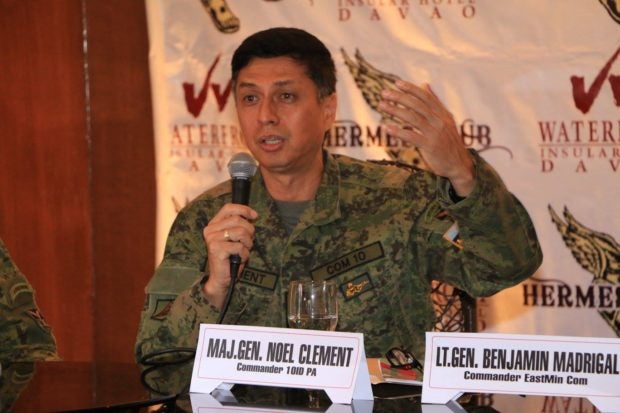 MANILA, Philippines — Incoming chief of staff of the Armed Forces of the Philippines Lt. Gen. Noel Clement said Friday that the 130,000-strong military under his watch will focus on the communist insurgency.

He will assume the post on September 24, replacing Gen. Benjamin Madrigal Jr.

Clement said he sees the need to engage other sectors to work on the campaign against communist rebellion, as public support is needed to address the problem.

“It has to be the whole country, the whole nation. This is a national problem, so we have to do address this as a people, collectively. Para magkaroon ng katahimikan ang bansa natin,” he added.

The Philippines is currently facing wide-ranging security threats — from internal to external defense concerns. Communist insurgency in the Philippines is one of the longest-running in Asia.

Clement said the military needs to modernize its capabilities in order to address external threats.

President Rodrigo Duterte has recently renewed his call to the military to finish the decades-long insurgency.

After failed talks with communist rebels, Duterte ordered the creation of a task force to end the local communist armed conflict. /kga