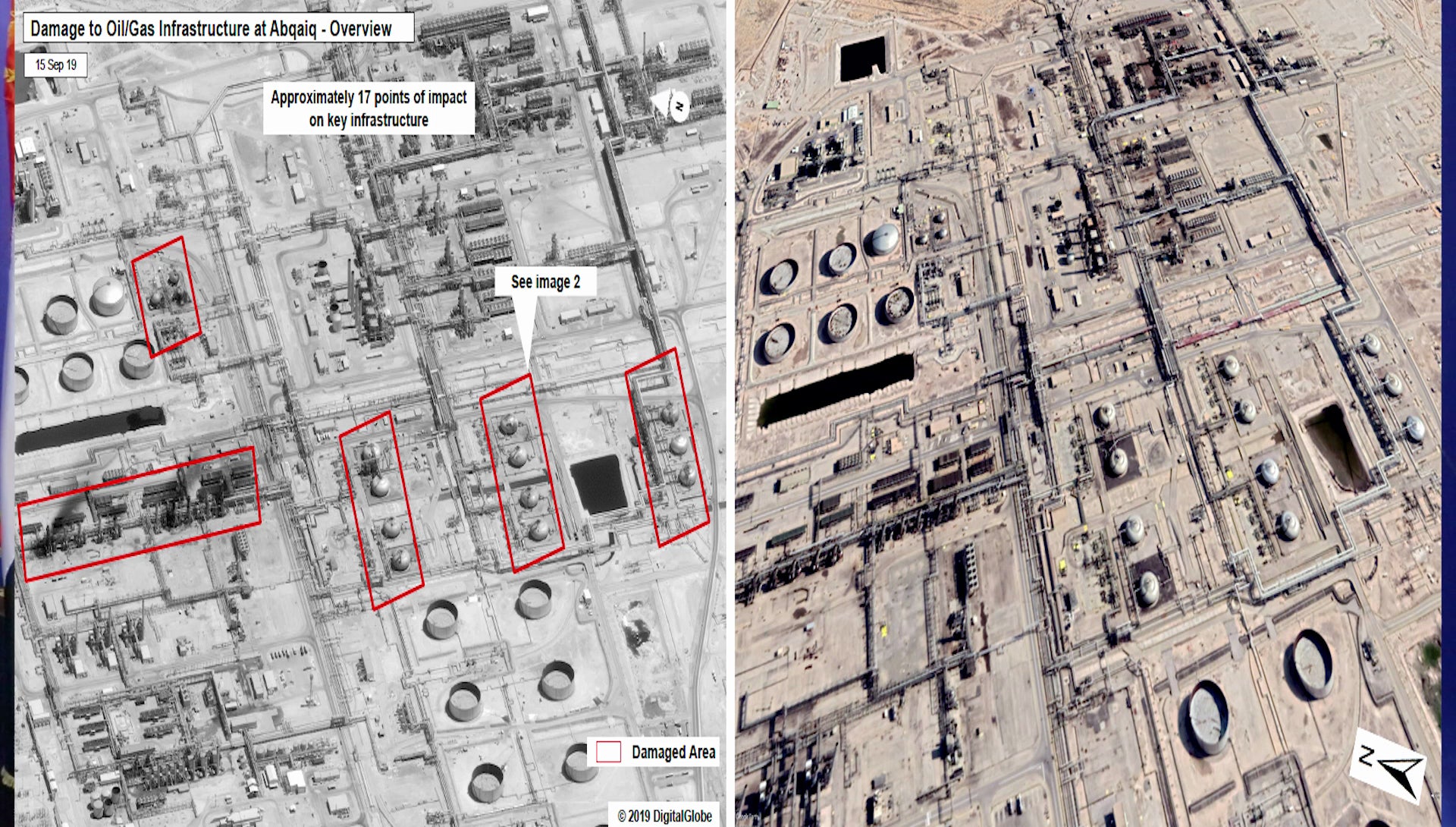 An image grab taken from a video made available by al-Huthi Media Office on September 18, 2019 shows what they say are satellite images of before (R) and after last week’s attack on Saudi Aramco’s oil fields. – Yemen’s Iranian-backed Huthi rebels claimed responsibility for last week’s oil installation attacks, which took out half the Kingdom’s production, although Washington and Riyadh have roundly rejected the claim and blamed Iran instead. (Photo by – / Al-Huthi Group Media Office / AFP)

RIYADH, Saudi Arabia — The Saudi-led coalition said it launched a military operation against Tehran-linked Yemeni rebels Thursday, in its first known strike since an attack on the kingdom’s oil industry that was blamed on Iran.

The operation in the north of the war-battered country comes after strikes on two Saudi oil facilities last weekend knocked out half the kingdom’s production, sending regional tensions soaring.

The coalition said its operation destroyed four sites north of the port city of Hodeida that were used by the rebels to assemble remote-controlled boats and sea mines, according to a statement released by the official Saudi Press Agency.

It described the sites as a threat to maritime security in the crucial shipping lane of Bab al-Mandeb and the southern Red Sea.

Hours before announcing the operation, which strains an already fragile UN-brokered ceasefire in Hodeida, the coalition said it intercepted a “remote-controlled, booby-trapped boat” that the rebels aimed to use for a “terrorist act in the south of Red Sea.”

The coalition said the boat was destroyed in the operation but it did not specify the target.

There was no immediate reaction from the rebels.

The coalition intervened in support of the Yemeni government in 2015 when President Abedrabbo Mansour Hadi fled into Saudi exile as the rebels closed in on his last remaining territory in and around second city Aden.

The conflict has since killed tens of thousands of people — most of them civilians — and driven millions more to the brink of famine in what the United Nations calls the world’s worst humanitarian crisis.

The coalition, assisted by Western powers including the U.S., has struggled to oust the ragtag but highly motivated tribal militia group that has stepped up attacks on Saudi cities.

But both Washington and Riyadh have ruled that out, saying the operation was beyond the Yemeni insurgents’ capabilities, and pinned the blame on Saudi Arabia’s arch rival Iran.  /muf