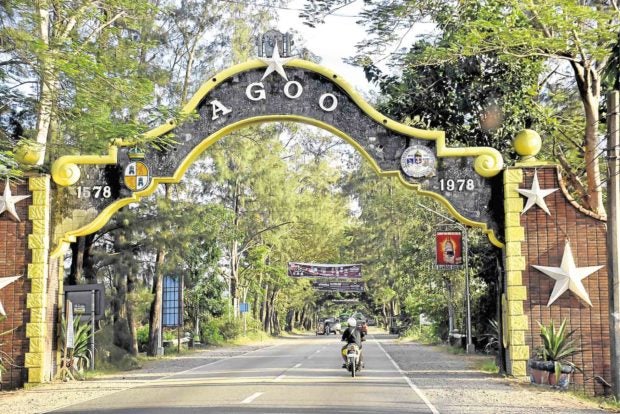 FACING THE AX Several trees along the national highway in Agoo town in La Union province have been marked for cutting as these pose danger to motorists. —WILLIE LOMIBAO

AGOO, LA UNION—A decades-old acacia tree in front of the plaza here had been cut while 26 others had been marked for cutting as the national government started clearing the national road in this La Union town of obstructions, local environment officials said.

Maximo Soriano, provincial environment and natural resources officer, said his office obtained on March 26 a permit from the regional office of the Department of Environment and Natural Resources (DENR) to cut the trees.

An inspection by pathologists from the University of the Philippines and the DENR’s Ecosystem Research and Development Bureau showed that the felled acacia tree was already decaying.

Soriano said the acacia was infected with heart rot, a fungal disease affecting mature trees, and was cut on Sept. 4.

Citing the pathologists’ report, Soriano said the bottom portion of the trunk was already hollow and the rotting tree posed risk to residents and motorists.

The tree cutting, however, had angered residents, who took to social media to call on Environment Secretary Roy Cimatu to intervene.

Soriano said the DENR would review President Duterte’s directive to clear roads of all illegal structures and constructions within 60 days before proceeding with the tree cutting.

More to fall
Agoo Mayor Stefanie Ann Eriguel assured the public that only 26 trees, which were covered by the March 26 permit, would be cut down to ensure the safety of motorists using the road.

But more than 600 trees along the Manila North Road (formerly MacArthur Highway) in the province had been marked by the Department of Public Works and Highways (DPWH), reportedly as part of its inventory, the DENR records showed.

In a Sept. 5 meeting with local officials, the DPWH representatives insisted on removing obstructions along the national highway in the towns of Rosario, Sto. Tomas, Aringay and Bauang.

Soriano said his office had also received requests from the DPWH to cut trees along roads in the towns of Aringay and Caba, and along the road stretches connecting Agoo and Baguio City and Rosario and Pugo.

Read Next
Baguio jail tightens watch over banned items
EDITORS' PICK
Bongbong Marcos says PH ‘open for business’ with new Clark Airport terminal
Individuals affected by ‘Karding’ now over 157,000
Newbie gamers are in for a treat with the power-packed feature of vivo Y16
Karding damage to infrastructure at P23M
House energy committee chair Arroyo bats for cheap electricity
Reignite your passion with the vivo Y35
MOST READ
Angelica Panganiban ‘duguan, sugatang mom’ one week into breastfeeding
LPA enters PAR, may develop into tropical depression
Badoy not with Office of the President, NTF-Elcac, under Marcos admin — solon
Charges readied vs gov’t guard with P290-M deposits
Don't miss out on the latest news and information.