MANILA, Philippines — The Department of Environment and Natural Resources (DENR) is set to take part in the celebration of International Coastal Clean-up (ICC) on Saturday, September 21, in an effort to help address the issue of ocean trash.

During the event, volunteers will serve as “citizen scientists” as they will also be tasked to record the trash they have recovered in coastal areas and riverbanks. The data collected will be compiled and submitted to Ocean Conservancy, a Washington based non-government organization, for campaigns and policymaking.

In Metro Manila, the event will focus on six sites namely Baseco in Tondo, Manila; the Las Piñas-Parañaque Critical Habitat and Ecotourism Area (LPPCHEA); SM by the Bay in Pasay City; Navotas Centennial Park; Gloria Maris, CCP Complex in Pasay City; and the riverbanks of Polytechnic University of the Philippines in Sta. Mesa in Manila. 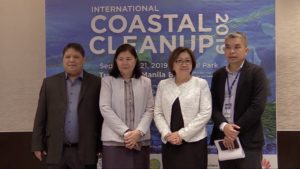 Clean-up activities will also be held in other waterways in the National Capital Region (NCR).

DENR-NCR Regional Executive Director Jacqueline Caancan said that the celebration of ICC is very timely, especially with the ongoing rehabilitation of the Manila Bay.

Caancan said other regional offices will also have their own coastal clean-up drives in relation to ICC.

ICC was first organized in 1986 by Ocean Conservatory and has since been celebrated around the world, with the Philippines starting to participate in 1994.

In 2003, former President Gloria Macapagal-Arroyo declared every third Saturday of September each year as the International Coastal Clean-up Day through Proclamation No. 470.

In Metro Manila, the event is celebrated in coordination with the 17 local government units of the capital region, as well as other government and non-government organizations, academic institutions, and private sector.