Magalong to name ‘Agaw-Bato’ cops in executive session with senators 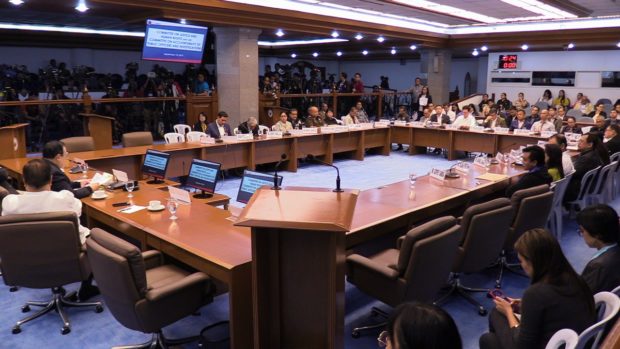 The panel’s inquiry that started on the review of Republic Act 10592’s implementation has already been tackling alleged irregularities in the Bureau of Corrections (BuCor) and New Bilibid Prison (NBP).

Magalong was called to testify on the alleged illegal drug trade in Bilibid, but consequently requested the executive session with senators to reveal the identities of law enforcers involved in another illicit modus allegedly involving law enforcers: “Agaw-Bato” or drug recycling.

Magalong said he had conducted intelligence operations into the illegal activities of law enforcement agents while he was CIDG chief.

“We will suspend the regular hearing but we will continue sa executive session for the following people: Gen. Magalong… we will hear you,” said Senator Richard Gordon, chairman of the committee.

“Afterwards we may call other witnesses, the two ladies,” he added.

Gordon was referring to BuCor Senior Insp. Maribel Bansil and Corrections Officer 3 Veronica Buño, who were among those implicated in the so-called “GCTA (good conduct time allowance) for sale” scheme.

Yolanda Camilon, common-law wife of an NBP inmate, earlier testified before the Senate panel and said she paid Bansil P50,000 for the early release of her partner under the GCTA law.

Buño, meanwhile, disputed Camilon’s earlier statement that she had called the latter to follow up on the payment for her common-law partner’s release.

Both Bansil and Buño denied their involvement in the supposed scheme.

During Thursday’s resumption of the Senate hearing, result from the investigation of the National Bureau of Investigation showed that Camilon, Bansil, and Buño communicated through text messages.

Meanwhile, Senate President Vicente Sotto III said he would submit a “very revealing” letter from a Bucor official during the executive session.

Gordon said the public hearing would continue “the moment we finish” the executive session. /kga