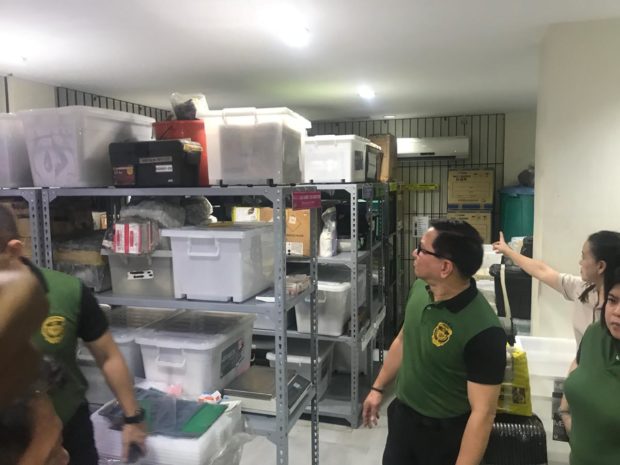 PDEA chief Aaron Aquino presents to the media on Thursday, Sept. 19, the storeroom of the agency where P22 billion worth of illegal drugs seized in anti-drug operations are being stored as evidence against drug suspects. Photo by Cathrine Gonzales / INQUIRER.net

MANILA, Philippines — Philippine Drug Enforcement Agency (PDEA) Director General Aaron Aquino assured on Thursday that the illegal drugs stocked in the storeroom of the agency are not being recycled, citing strict measures being enforced to keep the seized pieces of evidence secure.

Aquino presented to the media the so-called “evidence room” of the agency where around P22 billion worth of illegal drugs, of which P20 billion are “shabu,” confiscated from anti-drug operations are being stored.

He said that if someone has to go inside the storeroom for legal purposes, that person would have to go through a door with three padlocks, biometrics and facial recognition devices, and another steel door.

Only the evidence custodian and PDEA spokesperson Derrick Carreon hold the keys to the padlocks and can be recognized by the biometrics and facial recognition devices.

Inside the storeroom, there are eight night-vision closed-circuit television (CCTV) cameras, and humidifiers and air conditioners operating at all times so that the illegal drugs will not melt or be disfigured.

“‘Yun ang sinasabi kong recycling is zero. Walang recycling na mangyayari dyan (That’s how I can say that there is zero recycling. There will be no drug recycling here) because of the safeguards that we have put,” Aquino told reporters in an interview.

In a Senate hearing for PDEA’s budget for 2020 on Monday, Aquino said some of the illegal drugs stored in the agency were seized as early as 2010. He said there is no court order yet to destroy the drugs seized in their operations.

READ: PDEA still can’t destroy P22B worth of drugs in its custody

He said the PDEA, together with some senators and Justices, will hold a meeting on how to come up with a better process of destroying drugs faster after cases have been filed against the suspects.

Paragraph 4, Section 21 of the Republic Act 9165 or the Comprehensive Dangerous Drugs Act of 2002 states that “after the filing of the criminal case, the Court shall, within seventy-two (72) hours, conduct an ocular inspection of the confiscated, seized and/or surrendered dangerous drugs, plant sources of dangerous drugs, and controlled precursors and essential chemicals, including the instruments/paraphernalia and/or laboratory equipment.”

The same paragraph also states that “the PDEA shall within twenty-four (24) hours thereafter proceed with the destruction or burning of the same, in the presence of the accused or the person/s from whom such items were confiscated and/or seized, or his/her representative or counsel, a representative from the media and the DOJ, civil society groups and any elected public official.”

The PDEA chief earlier alleged that the recycling of illegal drugs seized in drug stings is still “rampant” among law enforcers. The Philippine National Police (PNP) denied this, saying it is only being practiced by a few rogue officers. Aquino, meanwhile, said the issue does not exempt PDEA agents operating on the ground. /je