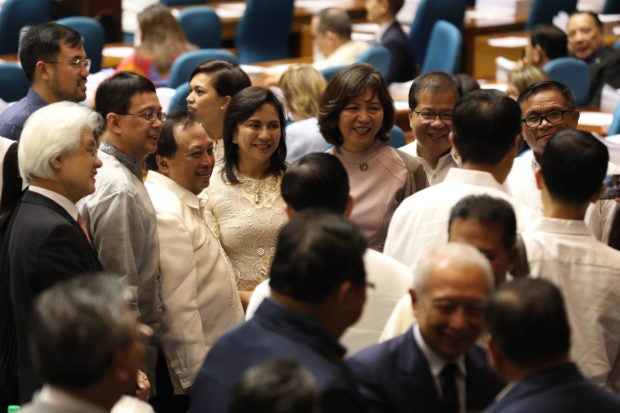 Vice President Leni Robredo attends the plenary deliberations for the Office of the Vice President’s budget for 2020 at the House of Representatives in Quezon City on Wednesday, September 18, 2019. The budget was swiftly approved during the proceedings, where several lawmakers also manifested the intent to increase it further in recognition of the good work that the OVP has been doing in terms of helping poor communities and inspiring the youth through its programs. (Photo by OVP)

MANILA, Philippines — Several lawmakers have called for an increase on the Office of the Vice President’s (OVP) proposed 2020 budget, which at present is at P673 million.

During the House plenary debates on the OVP 2020 budget on Wednesday, Camarines Sur 3rd District Rep. Gabriel Bordado noted how the OVP “constantly and judiciously” engages in outreach programs “covering the most far-flung areas in the country.”

However, the OVP’s “measly’ budget “can hardly tide it over with the help of the private sector,” he said.

“Here at the House (of Representatives), I express my support to augment the budget of the OVP,” Bordado said.

In the committee level, Cagayan de Oro 2nd District Rep. Rufus Rodriguez earlier made a manifestation to further augment the budget of OVP to fund its anti-poverty programs. Bordado expressed his support to this manifestation.

For her part, Kabataan party-list Rep. Sarah Elago expressed her commitment to “exhaust all means to augment the budget of the OVP” in support of its “Storya ng Pag-asa”program.

“[This] provided the needed deep well of inspiration for all the young Filipinos to realize their historic and significant role as the hope of our land and their role likewise in our nation building,” Elago said in a separate manifestation.

The two lawmakers, however, did not indicate the amount that they propose to add to the budget of the OVP.

After their manifestations, the House terminated the plenary debates on the OVP 2020 budget.

In a separate interview, OVP Chief of Staff Undersecretary Philip Francisco Dy said the OVP is thankful for the support of the lawmakers on the augmentation of its budget.

Should there be additional budget allocated to the OVP, Dy said the Office would ensure that it will go to additional support to indigent communities that are beneficiaries under its anti-poverty programs.

Dy explained that close to 68 percent of the proposed P673 million budget of the OVP in 2020 goes to subsidies for medical assistance, burial assistance and other programs under the “Angat Buhay” program.

He bared that a large portion of the budget for the “Angat Buhay” program comes from private sector partners of the OVP.

The OVP’s original proposed budget for 2020 was P684 million, however, the Department of Budget and Management only allocated P673 million for the agency, as indicated in the 2020 National Expenditure Program (NEP).