Senators slam Lorenzana for being ‘in the dark’ on telco deals 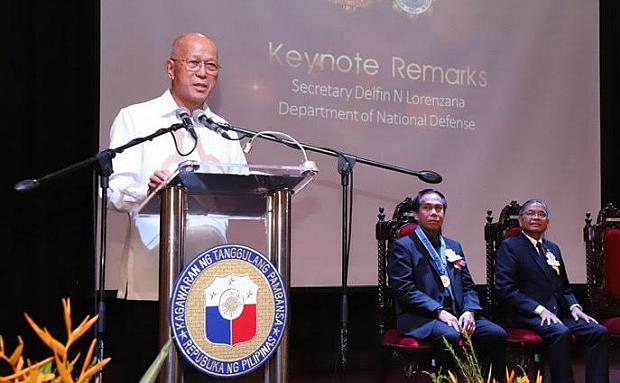 MANILA, Philippines — Defense Secretary Delfin Lorenzana may have to set up his own “radar system” in his own office after military officials left him out in the agreement they signed with a consortium that includes a Chinese telecom firm, Senate President Pro Tempore Ralph Recto said on Tuesday.

“If this deal can fly stealthily under the nose of the man responsible for our nation’s defense, then it raises anew the vulnerability of our borders from intruders,” Recto said in a statement.

Recto said the project, which “allows a Chinese telco to install towers inside our military camps, should have been cleared at the highest level due to its security implications.”

The Duterte administration has allowed the third player in the telecom industry to break the duopoly of PLDT Inc. and Globe Telecom, and to improve  the country’s internet service, one of the slowest in the world.

The Armed Forces of the Philippines cannot just play down the concerns over the deal as it should have been submitted for a “third party expert study,” Recto said.

Opposition Sen. Risa Hontiveros is urging her colleagues in the Senate to look into the agreement.

AFP chief of staff Gen. Benjamin Madrigal Jr. assured the public on Tuesday that the military was open to a probe.

Madrigal said the AFP had no intention to bypass the Department of National Defense in entering into the memorandum of agreement (MOA) as the deal was still subject to Lorenzana’s approval.

In filing Senate Resolution No. 137 on Monday, Hontiveros echoed the concerns of security analysts that the deal between the AFP and Dito Telecommunity had national security implications.

“[T]here is an urgent need to determine whether or not the presence of Dito’s facilities in military bases and installations undermines national security,” read a portion of Hontiveros’ resolution.

She said the Senate should also check if the deal, signed last week, complied with existing laws.

The senator noted that the AFP modernization law explicitly stated that the “sale, lease or joint development of military reservations” should be approved by Congress.

Hontiveros added that land within military reservations was not alienable and disposable.

Under the agreement, she said Chinese Telecom would be allowed to set up Dito’s telecommunications infrastructure “on land leased within military bases, thus raising fears over the possibility of espionage and other security risks.”

She also questioned why Lorenzana was “left in the dark” for a second time after the defense secretary previously admitted that he was not informed about the plan allowing Chinese firms to access three Philippine islands for supposed commercial activities.

He said he had signed the deal.

The AFP chief of staff said that, like in any other MOA, he only acted as the “recommending authority” while the defense secretary was the “approving authority.”

He said the military was not hiding something, reiterating that the contract was the same as those with Globe and Smart.

Communications facilities set up by Globe and Smart are colocated with military installations, not necessarily inside the camps. It was the same subject of the MOA with Dito, according to Madrigal.

The military undertakes due diligence, especially in security matters, before entering into agreements, he said.

By due diligence, he said the contract “passed through our intelligence, our legal and, of course, with our communications people.”

In a statement, Dito chief administrative officer Adel Tamano said that when he signed the MOA with the AFP, it was understood that the deal was subject to Lorenzana’s approval.

“We want to assure the public that Dito has a cybersecurity plan, as approved by the National Telecommunications Commission, and that the company will always protect the national and cybersecurity interests of the Philippines,” Tamano said.