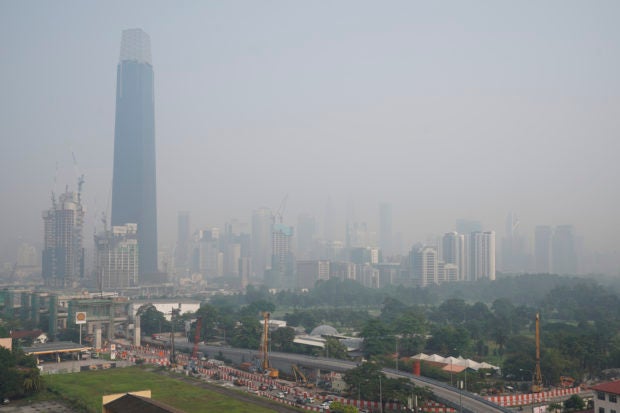 Kuala Lumpur city is shrouded with haze in Kuala Lumpur, Malaysia, Tuesday, Sept. 17, 2019. More than 100 schools were closed Tuesday after the air quality in the area continued to trend at very unhealthy levels. (AP Photo/Vincent Thian)

President Joko Widodo said Tuesday about 5,600 additional military personnel have been deployed to strengthen the current force of 9,000 people to fight the fires, which have destroyed more than 328,700 hectares (812,000 acres) nationwide.

He traveled to the hardest-hit Riau province, where nearly 50,000 hectares (123,500 acres) have burned, to galvanize authorities to get the cross-border haze under control.

He said at least 52 helicopters have dropped more than 263 million liters (69.5 million gallons) of water and 164 tons of salt for cloud-seeding as part of the firefighting efforts in six provinces that have declared states of emergency. /kga