‘Pawikan’ in search of nest a surprise guest at Subic resort 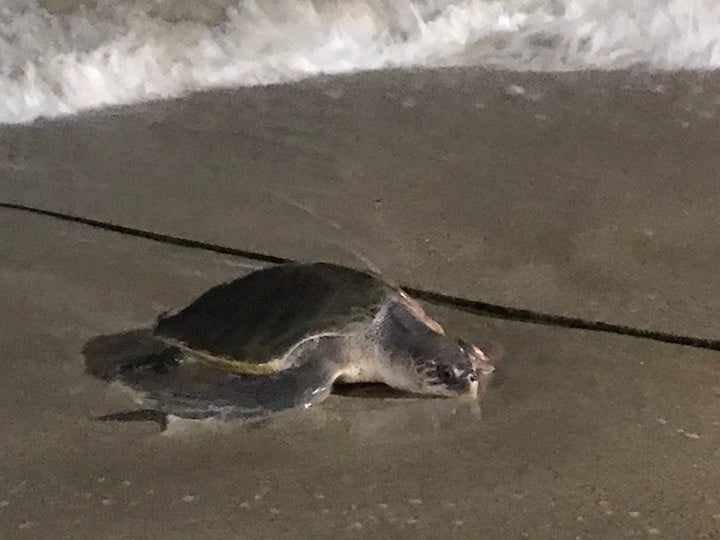 This adult female sea turtle looks for a place to lay her eggs at the All Hands Beach in Subic Bay Freeport. CONTRIBUTED PHOTO

The turtle was seen in search of a spot in the sand at All Hands Beach, a resort, to lay her eggs around 9:30 p.m., according to Jong Cortez, Olongapo city vice mayor, who was at the beach when the turtle crept in.
The resort is one of seven major areas in Subic that had been identified by the Department of Environment and Natural Resources (DENR) as nesting sites for pawikan, mostly olive ridley, an endangered species.
Aside from olive ridley, also found in Zambales province are green sea turtles (Chelonia mydas) and hawksbill sea turtles (Eretmochelys imbricata).
Workers at the beach resort said several adult olive ridley turtles lay eggs at the resort beach every year.
Female sea turtles return to their natal place after 20 to 30 years to nest.
These marine turtles have a unique memory that will help them find their way back to the place where they were born
Since 2011, the resort had been releasing baby sea turtles to the sea as part of its social responsibility target. Joanna Rose Aglibot/TSB
ADVERTISEMENT
FEATURED STORIES
NEWSINFO
Tagle one of cardinals eyed to become next pope, says report
NEWSINFO
Raffy Tulfo blasts ‘killjoy’ critics of Angara’s birthday party: It’s for charity
NEWSINFO
Walden Bello arrested over cyberlibel case filed by ex-Davao City info officer