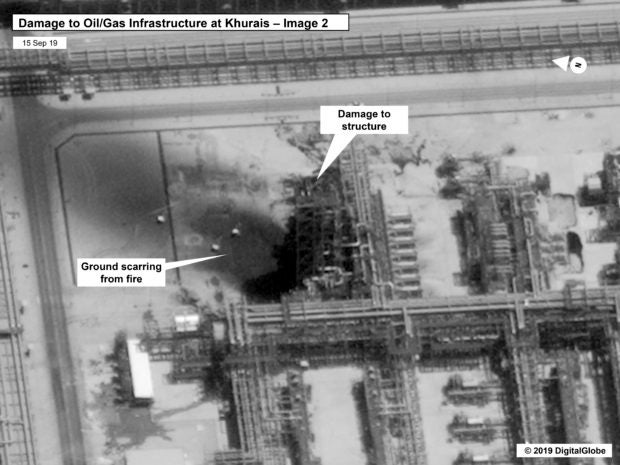 This image provided on Sunday, Sept. 15, 2019, by the U.S. government and DigitalGlobe and annotated by the source, shows damage to the infrastructure at at Saudi Aramco’s Kuirais oil field in Buqyaq, Saudi Arabia. The drone attack Saturday on Saudi Arabia’s Abqaiq plant and its Khurais oil field led to the interruption of an estimated 5.7 million barrels of the kingdom’s crude oil production per day, equivalent to more than 5% of the world’s daily supply. (U.S. government/Digital Globe via AP)

MANILA, Philippines — Progressive lawmakers have renewed their push for unbundling of data on oil prices in the country in the wake of attacks on two major oil sites in Saudi Arabia over the weekend.

Bayan Muna Rep. Carlos Zarate and Bayan Muna chair Neri Colmenares aired their fear Monday that without the unbundled data on oil prices, there may be exorbitant oil price hikes due to developments in the Middle East.

Zarate, House Deputy Minority leader, called on the House leadership to immediately set a hearing for House Resolution No. 9 to investigate oil pricing schemes of oil companies especially after the assaults on Saudi refineries.

The attack, which would reportedly cut the kingdom’s production by about 5.7 million barrels per day, could be used by fuel companies to justify overpricing, according to Colmenares.

“The problem with this is that without the unbundled data on oil prices how can the public know that these are not overpriced?” he asked. “Just like in electricity and water, the public has a right to know how fuel prices are determined so that they can be vigilant against overpricing and market abuses.”

Zarate said Bayan Muna has been demanding for the oil pricing data from oil companies in numerous hearings in Congress since 2017 to see if there is overcharging or predatory pricing.

“To put it bluntly, an oil shortage or steep rise in oil price will rock the Philippine boat & tip it over,” he added in a tweet.