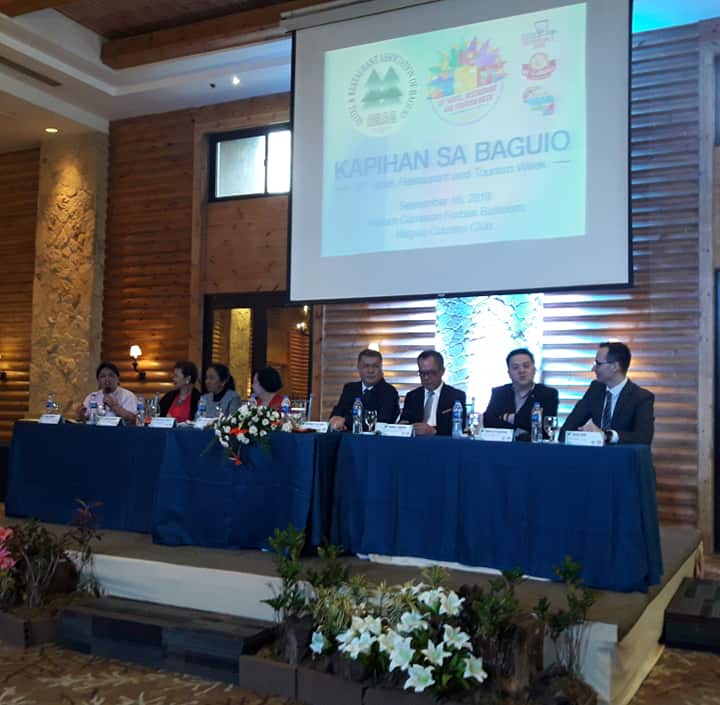 Officials and members of the Hotel and Restaurant Association of Baguio hold a press conference on Monday as they kick off the 15th HRAB Tourism Week celebration in Baguio City. CONTRIBUTED PHOTO / KIMBERLIE QUITASOL

BAGUIO CITY –– The unsolved gridlocks in this summer capital could be the major reason hotels saw a declining rate of occupancy since January this year.

Anthony de Leon, president of the Hotel and Restaurant Association of Baguio (HRAB), on Monday said their hotel members recorded as much as 60 percent drop in hotel occupancy during Holy Week when tourists usually spend their vacation for the annual break.

During regular days, local hotels have been seeing up to 90 percent drop in occupancy, De Leon said as HRAB kicked off its 15th HRAB Tourism Week celebration here.

De Leon, who is also the general manager of the Baguio Country Club, said the worsening traffic problem in the city has been turning tourists away.

Ramon Cabrera, HRAB treasurer, and general manager, said hotel operators might not recover their losses before the end of the year despite adjusting their rates to attract tourists.

Jeff Ng, general manager of Hotel Supreme, said the lack of space for parking has aggravated the traffic problem.

Baguio City Councilor Elaine Zambrano said it is a challenge for the city government to address the perennial traffic issue./lzb