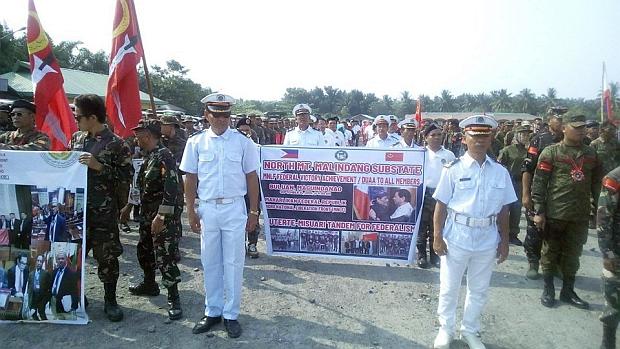 MNLF fighters marched to Buluan town in Maguindanao on Sunday, Sept. 15, 2019, to join a peace rally there. (Photo from the MNLF)

COTABATO CITY, Maguindanao, Philippines — Army soldiers in Maguindanao disarmed on Sunday, Sept. 15, about 50 Moro National Liberation Front (MNLF) members who identify with the leadership of its founder, Nur Misuari, before they were allowed join a peace rally in Buluan town in Maguindanao.

Lt. Col. Edwin Alburo, speaking for the Army’s 6th Infantry Division, said the MNLF fighters did not resist when soldiers from the 40th Infantry Battalion asked them to surrender their guns at around 12:30 p.m.

Alburo said soldiers were sent to the Buluan town center after residents reported the presence of the heavily armed men.

After a negotiation with Ustadz Jamaluddin Abdullah, chief of the Dragon Border Command of the MNLF, the surrender of firearms was facilitated.

The MNLF fighters, who were in fatigue uniforms, came were from the provinces of Cotabato and Davao.

The Buluan gym, where the rally was staged, was surrounded by soldiers who were backed by armored personnel carriers.

An Army officer admitted that the situation throughout the rally was tensed but “cooler heads prevailed.”

Alburo said the former rebels were neither arrested nor investigated. They were allowed to go home at past 3 p.m. after the rally.

He refused to say if charges would be filed against the MNLF members who carried firearms.

Under the 1996 peace agreement between the government and the MNLF, members of the latter are not allowed to carry firearms and don their uniforms outside of their government-recognized camps.