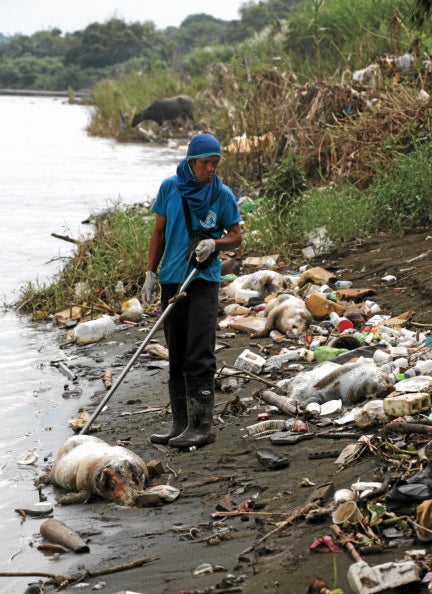 The culprits behind 56 dead pigs found floating on the Marikina River are facing a slew of civil and criminal charges.

But first they must be identified—and arrested.

Marikina City Mayor Marcelino Teodoro said in a statement on Sunday that regardless of whether the pigs were thrown in the river or were just washed into the waterway by flood, those who disposed of the carcasses would be held accountable for violating the Sanitation Code and the Clean Water Act.

“We are going to file a civil case to claim damages for the equipment and manpower [used] by the city for the clearing and burial of those pigs,” Teodoro said.

Agriculture Secretary William Dar on Sunday warned hog raisers to immediately report disease in their livestock and properly dispose of dead animals or they will be prosecuted.

Hog raisers who do not follow proper disposal methods, like those who dumped dead pigs on the Marikina River and on a creek in Quezon City, violate the Animal Welfare Act “as they deprived their dead pigs of adequate care, maltreating them in the process,” Dar said in a statement.

Marikina officials have yet to identify the origin of the dead pigs, several days after the first carcasses were found floating on the river.

There are no piggeries or slaughterhouses in Marikina so the carcasses could have only come from another municipality upriver.

Noverlee Calub of the Bureau of Animal Industry (BAI) said a team had been dispatched to Montalban, Rizal province, where the Marikina River has its headwaters, to investigate how the dead pigs ended up floating on the 27-kilometer waterway.

The Rizal provincial veterinary office and the Department of Agriculture in Calabarzon are also involved in the investigation, Calub said.

The first carcasses were seen on the river in Barangay Santo Niño on Thursday morning. More carcasses were found on the following days in the downriver villages of Nangka and Kalumpang.

One of the carcasses was sent to the BAI for testing for African swine fever on Friday.

The rest were immediately buried on advice from the agriculture department, which had confirmed an outbreak of African swine fever in the Philippines.

African swine fever cannot be transmitted to humans, but Manuel Carlos, head of veterinary services in Marikina, said other diseases could arise from the river if its waters had been contaminated by the dead pigs.

The city government banned fishing, swimming and other water-related activities after the first carcasses were found.

Samples of water from the river have been sent in for testing.

In Quezon City, the local government said on Sunday that it had killed 50 pigs belonging to illegal backyard raisers in Barangay Bagong Silangan, where 11 pigs had been found ailing from African swine fever.

In a statement, the city also said it had asked the police to set up checkpoints within a kilometer radius of Oriole Extension and Area 5 of Barangay Silangan—ground zero for the African swine fever outbreak in the village—to prevent meat traffic.

The veterinary office also said it was strictly monitoring the markets in the city to ensure no meat from infected pigs would be sold to the public.

In Bulacan province, where pigs had died from African swine fever, demand for pork has dropped since the outbreak in August.

Local officials, however, assure the public that it is safe to eat pork from Bulacan.

In Nueva Ecija province, local officials in Bongabon town have intensified a watch on pork in public markets.

Bongabon Mayor Allan Gamilla on Sunday led market inspections to make sure vendors had veterinary certificates and other permits required to sell pork.

In Iligan, health officials are requiring hog dealers to secure veterinary certificates from their own local governments before allowing them to bring their livestock into the city.

Iligan City is known for its delicious roast pig. It will celebrate the feast of Saint Michael the Archangel on Sept. 29. —WITH REPORTS FROM ANNELLE TAYAO-JUEGO, CARMELA REYES-ESTROPE, ARMAND GALANG AND RICHEL UMEL