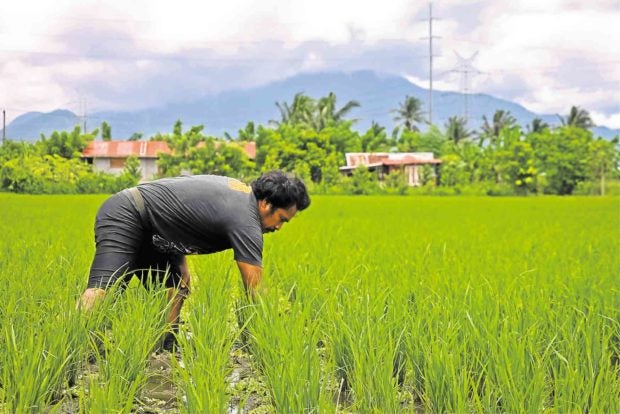 BACK-BREAKING JOB A farm hand in Calauan, Laguna, checks a rice paddy for pests and weeds. Growing palay is no easy job for farmers as grain prices continue to drop amid competition from imported rice. —KIMMY BARAOIDAN

In the bigger rice-producing provinces of Oriental Mindoro and Occidental Mindoro, the local government units (LGUs) are also set to buy palay through farmers’ cooperatives.

But the vice mayor of Sablayan, Occidental Mindoro, the top rice-producing town in Mimaropa (Mindoro, Marinduque, Romblon, Palawan) region, said this solution was not enough and called it “unsustainable.”

“The low price of palay alone would not be an issue if only there were enough support for the farmers,” Sablayan Vice Mayor Walter Marquez said on Sunday.

Marquez called on President Rodrigo Duterte to “suspend temporarily” the implementation of the Republic Act No. 11203 or the Rice Liberalization Act (also known as the rice tariffication law), which allowed the influx of imported rice, pulling down the farm-gate price of locally produced palay.

He said local farmers could never keep up with the imported supply without enough government support like irrigation facilities and lower costs of seeds and fertilizers.

“In Mindoro, we don’t even have our own irrigation [system] and we still depend on the rain [to irrigate our farms],” Marquez said in a telephone interview.

Sablayan alone has 22,897 hectares of land planted to rice, with an average yield of 4 to 5 tons per hectare.

Arnel de Mesa, regional director of the Department of Agriculture (DA) for Calabarzon, said the agency would buy local palay at P19 per kilogram, the support price set by the national government to match the current farm-gate price.

According to De Mesa, the lowest price for “wet rice” (grains with around 30-percent moisture content and have yet to be dried) in the region is P10 (Laguna), while the highest is P16 per kilo (Batangas). The price of clean and dry palay is between P14 (Rizal) and P18 per kilo (Laguna).

In the Mindoro provinces, known for producing the fancy rice variants like “sinandomeng” and “dinorado,” the price of wet palay has dropped to P12 (Oriental Mindoro) and P14 (Occidental Mindoro) per kilo, from the previous P17 to P20 per kilo.

The government, however, would buy only the clean and dry palay, with the local harvest season to begin by the end of September. 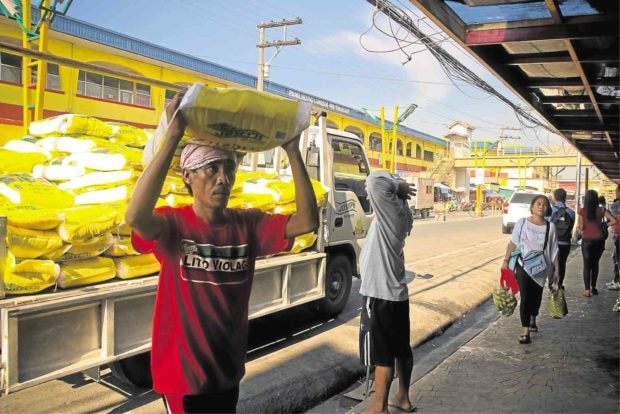 “Mindoro [for instance] has three cropping seasons. Sure, the government buys [local rice] this year, but what about next year or the year after that?” Marquez said.

Between 80,000 and 90,000 ha of land in the Mindoro provinces are planted to rice during the wet cropping season, according to Tony Gerundio, DA director for Mimaropa.

About 25 percent of the island’s rice harvest, records showed, is sold to Bulacan province and to provinces in Western Visayas region.

In a separate phone interview, Gerundio said a problem was the “limited” space in NFA’s “bodega” (warehouses) to store the palay, should the agency begin buying from local farmers. He said the warehouses were still full of rice stocks bought last year and the NFA needed to dispose of these first.

“We’ve talked to the provincial governments [which have agreed to] take charge of the logistics and the [additional] bodega,” Gerundio said.

He said the provincial governments would lease warehouses for rice storage and manage the use of rice processing centers for the farmers to dry and mill their palay.

The provincial governments would also act as “conduits” for farmers’ cooperatives to avail of loans with the Land Bank of the Philippines, he said.