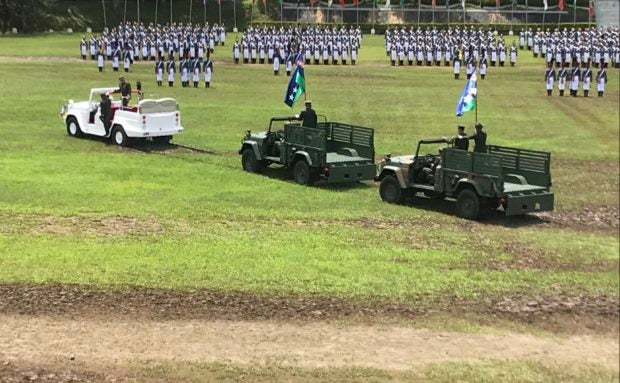 STALLED. The “White Carabao,” ferrying Armed Forces Chief of Staff Gen. Benjamin Madrigal Jr. as he troops the lines of cadets, is stuck in the mud at the Philippine Military Academy on Friday (Sept. 14). The cadet corps gave a testimonial parade for Madrigal, who retires on Sept. 28. INQUIRER PHOTO/ Vincent Cabreza

FORT DEL PILAR, Baguio City — Thick mud trapped the vehicle carrying Armed Forces Chief of Staff Gen. Benjamin Madrigal Jr. when he was given a testimonial parade by the corps of cadets of the Philippine Military Academy on Saturday (Sept. 14).

Madrigal waited for a few seconds while the driver of the jeep, dubbed the “White Carabao,” tried to free the vehicle,  before he stepped down and walked the rest of the way to review the lines of cadets at the Borromeo Fields.

PMA cadets honor all high-ranking alumnus on or before they end their military careers. A member of PMA Sandiwa Class of 1985, Madrigal is scheduled to leave the military on Sept. 28, when he turns 56 years old. 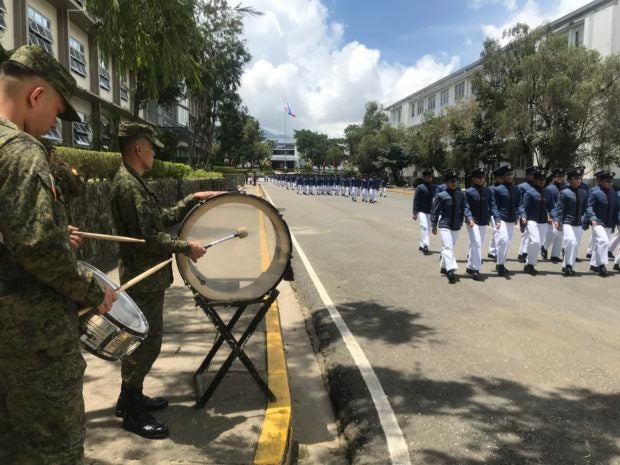 Heavy rains fell in Baguio on Friday night (Sept. 13), prompting the cadets to match their parade uniforms with black rubber boots, instead of their parade shoes. 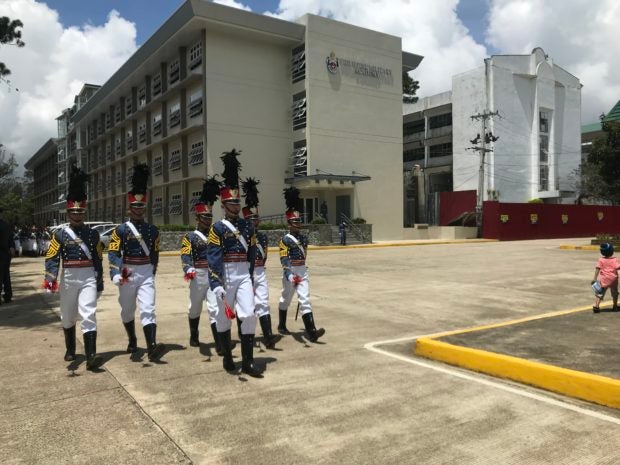 Madrigal, an army general who serves as the 51st chief of the Armed Forces of the Philippines, did not say who had the best chance of replacing him, but said President Rodrigo Duterte will select from a rich pool of talents he will leave behind.

The new Chief of Staff would need to pursue Duterte’s decision to resolve the 50-year-old communist rebellion, he said. “The President does not want his successor to have this problem anymore,” Madrigal said.

He also stressed that the new Chief of Staff would support localized peace talks while government directs all public resources to address social issues which spawned the insurgents.

He addressed the cadets behind closed doors, but Madrigal told newsmen that he would remind the future AFP officers that “service reputation starts here in the hollowed grounds.”

“PMA is where we are inspired to serve the people,” Madrigal said. /jpv