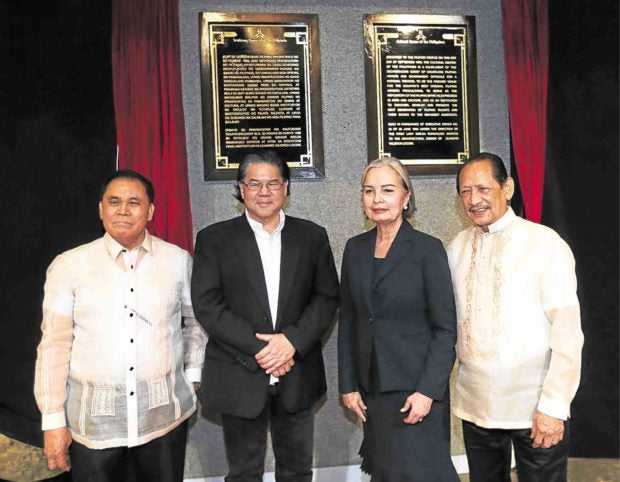 MANILA, Philippines–Cultural Center of the Philippines (CCP) officials recently led the unveiling of commemorative markers as part of the 50th anniversary celebration of the country’s premier institute and venue of the performing arts.

The markers were installed at the lobby of Tanghalang Nicanor Abelardo (CCP Main Theater), with CCP president Arsenio “Nick” Lizaso welcoming guests, and chair Margie Moran Floirendo and board of trustees member Baltazar Endriga reciting the text of the markers in English and Filipino, respectively.

“The Cultural Center of the Philippines is a fulfillment of the decadeslong quest of countless Filipino artists and government officials for a national theater,” the markers read.

Gracing the occasion were CCP’s board of trustees, executives, employees, former chairs and presidents and the family of National Artist Leandro V. Locsin, who designed the center in the Brutalist architectural style.

Among the special guests were representatives of the National Commission for Culture and the Arts, National Museum, National Historical Commission of the Philippines, and other arts and culture stakeholders.

The CCP formally opened on Sept. 8, 1969, with the premiere of the musical “The Golden Salakot: Isang Dularawan.” Since then, it has been presenting live music, dance and theatrical performances, film screenings, visual arts exhibits, literary gatherings and workshops featuring Filipino and international artists.