In Ecuador, a nighttime crypt visit for the morbidly curious 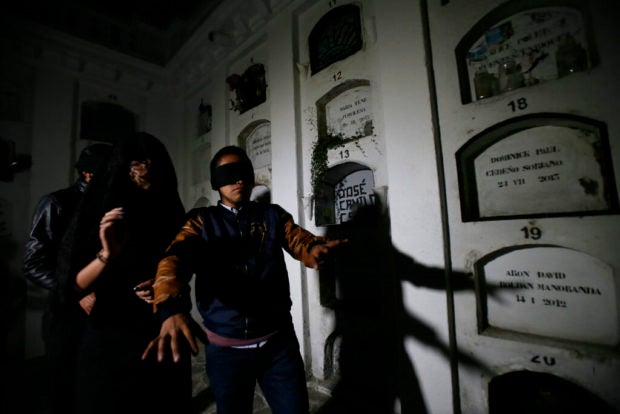 Blindfolded tourists walk through El Tejar cemetery, in downtown Quito, Ecuador, Wednesday, Sept. 11, 2019. They’re there to get a taste of death while still alive, spending part of the night in a dark crypt at the El Tejar cemetery, the latest example of the so-called “necro tourism” trend luring those with a keenness for the macabre. (AP Photo/Dolores Ochoa)

QUITO, Ecuador — It’s a chilly night in Ecuador’s capital and the small group of men and women visiting the city’s oldest cemetery are understandably nervous.

Led by guides in black hooded capes, they navigate a maze of crypts as voices call out existential questions into the night.

They’re there to get a taste of death while still alive — spending part of the night in a dark crypt at the El Tejar cemetery, the latest example of the so-called “necro tourism” trend luring those with a keenness for the macabre.

“The idea is to make people reflect,” says Alexandra Ortega, director of Quito Post Mortem, the company that arranges the graveyard tours. “In cemeteries, life and death can be found. Life is ephemeral and death the only certainty.”

Latin America has long harbored a mystical, up front fascination with death. Few visits to Buenos Aires are considered complete without a visit to the Recoleta cemetery where luminaries like iconic former First Lady Eva Perón are buried. Mexico’s Day of the Dead pays homage to the deceased with festive foods and decorative skulls.

“Death is very much present in the Latin American sensibility,” said Peter Sanipatín, a psychologist in Ecuador. “These activities allow us to confront an imaginary death and come out triumphant, at least for the moment.”

In many cities across the globe, tourism groups have begun encouraging visitors to take a step toward the dark side as an opportunity to reflect on the past and the very nature of humanity.

“Imagining that situation helps us confront something that scares us,” Nathan Digby, a philosophy and religion professor, said of the surge in cemetery tours.

The idea for Ecuador’s nighttime cemetery visits arose as Ortega was investigating out of the box tour ideas for her tourism studies thesis. As a twist, she decided guests would be completely blindfolded and spend time lying inside a crypt.

“Doing it blindfolded intensifies the experience,” she said.

On a recent evening, 13 visitors ventured into the cemetery, which is filled with blocks of tombs stacked four or more levels high. Amid the graveyard silence, guides asked questions and made nerve-rattling sounds by clashing metal objects.

One young woman who is part of the tour company touched guests on the arm and begged not to be left alone as they entered an underground crypt.

Then the thrill-seekers were led into empty cement niches where caskets are typically placed and asked to think about what their relatives would say on the day of their funeral.

One woman panicked, refused to participate and left the group.

But others said they found it to be a nearly meditative experience.

“I reflected on death,” said Stalin Caiza, 23, who left with tears in his eyes. “As they say, we are made of dust and will return to dust.” /jpv