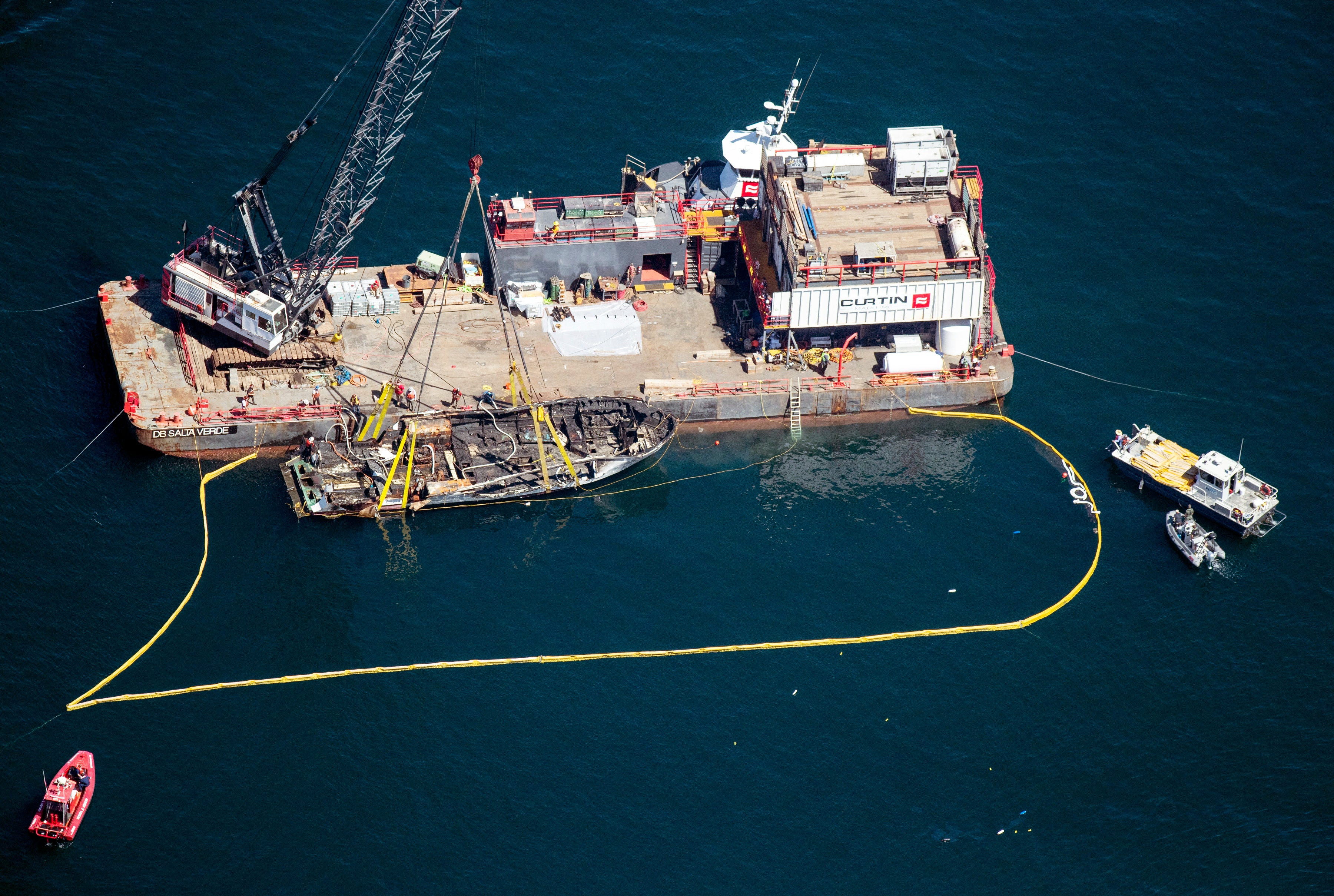 The burned hull of the Conception is brought to the surface by a salvage team, Thursday, Sept. 12, 2019, off Santa Cruz Island, Calif., in the Santa Barbara Channel in Southern California. The vessel burned and sank on Sept. 2, taking the lives of 34 people aboard. Five survived. (Brian van der Brug/Los Angeles Times via AP)

LOS ANGELES — A California scuba dive boat was operating in violation of Coast Guard regulations when crew members were sleeping and a pre-dawn fire killed 34 people, leaving grieving families wondering if a required night watchman could have saved their loved ones.

Thursday brought a disclosure from the National Transportation Safety Board that all six crew members were asleep aboard the Conception on Sept. 2 when the deadly blaze broke out.

The NTSB’s findings could aid federal authorities conducting a criminal investigation into the fire, who could bring charges under a statute known as seaman’s manslaughter. The law was enacted during the 19th century to punish negligent captains, engineers and pilots for deadly steamboat accidents that killed thousands.

Five crew members, including the captain, were asleep on the vessel’s second deck and survived. The sixth, a 26-year-old deckhand named Allie Kurtz , was sleeping below and perished with the boat’s 33 passengers.

Kurtz’s grandmother, Doris Lapporte, said she was too distraught Thursday to comment on the NTSB’s findings, issued days before the family planned to scatter her granddaughter’s ashes at sea.

“I have nightmares every day about her going up in flames,” Lapporte said, crying. “This isn’t the time to talk about how angry I am or how I feel.”

The cause of the Sept. 2 blaze has yet to be determined. Crews raised the wreckage of the burned-out boat Thursday from waters off Santa Cruz Island where the vessel was anchored the night of the tragedy. The island is northwest of Los Angeles and about 20 miles (32 kilometers) from the mainland.

The Conception’s Certificate of Inspection, issued by the Coast Guard, requires a “roving patrol at all times” when passengers’ bunks are occupied.

The parents of Charles McIlvain, a 44-year-old visual effects designer who was onboard with his neighbor, said the missing roving watchman “disturbs us greatly.”

“Early detection may have made an incredible difference in outcome,” Clark and Kathleen McIlvain said in a statement.

Douglas Schwartz, an attorney for the Conception’s owner, Truth Aquatics Inc., said in a statement that a crew member was awake shortly before the fire, which started around 3 a.m. He said the crewman checked “on and around the galley area” around 2:30 a.m. The first mayday call from the captain was transmitted at 3:14 a.m.

He also touted the company’s safety record, noting it passed “every single annual Coast Guard inspection for the last 45 years, while hosting 450,000 divers on 1.3 million dives.”

The victims on the Conception were believed to have died from smoke inhalation. They were a diverse collection, including a girl celebrating her 17th birthday with her parents and a friend, a marine biologist who was leading the three-day scuba diving excursion, an Indian-born dentist and her husband from Connecticut, an environmental scientist and a professional photographer.

The Santa Barbara County Sheriff’s Office on Thursday said it had identified all the victims, using DNA testing.

The office issued a list including the last seven names. They included the Connecticut couple previously identified by relatives and neighbors, along with several people involved in technology in the Silicon Valley.

The last of the bodies was pulled from the water Wednesday.

“May they all rest in peace and may their families know that all of us who have been involved in this sad operation continue to hold them in our hearts and in our prayers,” Brown said.

The Coast Guard has issued additional safety recommendations in the wake of the tragedy, such as limiting the unsupervised charging of lithium-ion batteries and the use of power strips and extension cords.

The NTSB report provided few additional details and noted that investigators have only interviewed three of the five surviving crew members, who said no mechanical or electrical issues had been reported before the fire.

Attorney Michael Lipman, who represents boat captain Jerry Boylan, said he does not believe his client spoke with the NTSB. Lipman refused to discuss any facts in the case, whether he had spoken with any federal agencies or whether he advised his client not to speak with authorities.

“I would say that he’s emotionally devastated,” Lipman said. “It’s a tragedy.”

The NTSB report did not mention potential charges, which would be part of the criminal probe.

An attorney who represented a Maine lobster boat captain charged in the deaths of two crew members who fell overboard when his boat flipped in high seas said he suspects prosecutors reviewing the information will ask if there was a watchman and, if not, what the captain had said or done.

“No watch? A boat that far offshore?” Michael Turndorf asked. “I think that fits the statute. I would be surprised if those are the real circumstances that somebody doesn’t get charged.”

The NTSB says one of the crew members on the upper deck awoke to a noise and saw flames rising from the middle deck. He alerted the rest of the crew as the captain issued a panicked mayday call to the Coast Guard.

The crew, finding the ladder to the main deck on fire, jumped down — one breaking a leg in the process. They tried to reach the others through a window but couldn’t open it. They were forced to jump overboard when they became “overwhelmed by smoke.”

The captain and two crew members swam to the vessel’s stern and reboarded the boat, according to the NTSB report. They opened the engine room’s hatch but didn’t find any fire.

With other access routes blocked, they launched the boat’s skiff and picked up the other two crew members and went to a nearby anchored boat.

Once aboard, the captain continued to send mayday calls as two crew members returned to the Conception to search for survivors near the burning wreckage. /muf