TIJUANA, Mexico – A new level of despair spread among tens of thousands of migrants waiting on the Mexican border to seek refuge in the U.S. as the Trump administration began enforcing radical new restrictions Thursday on who qualifies for asylum. 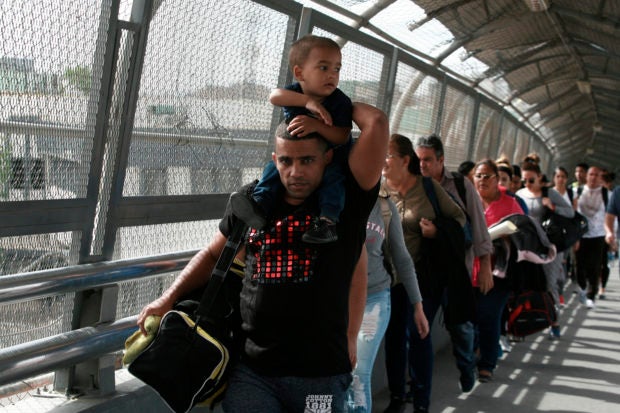 FILE – In this April 29, 2019 file photo, Cuban migrants are escorted by Mexican immigration officials in Ciudad Juarez, Mexico, as they cross the Paso del Norte International bridge to be processed as asylum seekers on the U.S. side of the border. Mexican Foreign Secretary Marcelo Ebrard said Thursday, Sept. 12, 2019 that Mexico’s government doesn’t agree with an “astonishing” U.S. Supreme Court order that would block migrants from countries other than Mexico and Canada from applying for asylum at U.S. borders. (AP Photo/Christian Torres, File)

“The United States is the only option,” Dunea Romero, a 31-year-old Honduran, lamented with tears in her eyes at a shelter in Tijuana.

She said she packed a bag and fled her homeland with her two boys, ages 7 and 11, after learning that her abusive ex-husband, a powerful gang leader, was going to have her killed.

The new U.S. policy would effectively deny asylum to nearly all migrants arriving at the southern border who aren’t from Mexico. It would disallow anyone who passes through another country without first seeking and failing to obtain asylum there.

The rule will fall most heavily on Central Americans, mainly Hondurans and Guatemalans, because they account for most people arrested or stopped at the border.

But it also represents an enormous setback for other asylum seekers, including large numbers of Africans, Haitians and Cubans who try to enter the United States by way of the Mexican border.

It is perhaps the biggest change to U.S. asylum policy since it was established in 1980 and the most consequential move of President Donald Trump’s crackdown on immigration, a signature issue as he heads into a re-election campaign.

The Trump administration put the policy into effect the day after the Supreme Court cleared it to do so while legal challenges move forward.

Acting U.S. Customs and Border Protection Commissioner Mark Morgan called the high court’s go-ahead a “big victory” in the administration’s effort to curb the flow of migrants. Migrants and their advocates decried it as tantamount to a death sentence for many of those fleeing poverty and violence in their homelands.

Jessica Collins, a spokeswoman for U.S. Citizenship and Immigration Services, the agency that handles asylum cases, said it will be retroactive to July 16, when it was announced.

Collins said it will help remove one of the factors that impel people to set out for the United States, “leading to fewer individuals transiting through Mexico on a dangerous journey.”

An unprecedented surge of asylum-seeking families from Central America has overwhelmed U.S. authorities during Trump’s tenure, prompting the unprecedented response.

Under another Trump administration policy, introduced in January, more than 40,000 asylum seekers have been forced to wait in Mexico while their cases wind through the clogged American immigration courts.

In Tijuana on Thursday, Ngoh Elliot Takere of Cameroon stood only steps from the United States, frustrated after learning that he could be blocked from getting in. He has been waiting for two months in Mexico for his number to be called so he can submit a request for asylum.

The 28-year-old furniture maker said he left his war-torn African homeland after being jailed by police for being part of the English-speaking minority.

He was released on the condition that he leave the country or be killed, he said. He said the military burned his family’s home, killing his mother as she slept.

As for the possibility of being turned away by the United States, Takere said: “I can’t think of that.”

Many asylum seekers denied refuge under the new policy will be placed in fast-track deportation proceedings and flown to their home countries at U.S. expense, authorities said.

Some seeking refuge may get to stay in the United States through other legal avenues, including protection under the United Nations Convention Against Torture, but the threshold to qualify is much higher.

“Our Supreme Court is sentencing people to death. There are no safeguards, no institutions to stop this cruelty,” the immigration-assistance group Al Otro Lado said in a statement. The Mexican government likewise called the high court’s action “astonishing.”

But Morgan said migrants with valid claims should instead be seeking asylum “from the first country they come in contact with.”

“They shouldn’t be paying the cartels thousands of dollars and risking their lives to take a 1,000-mile journey across several countries to get help,” he said on Fox News. /gsg