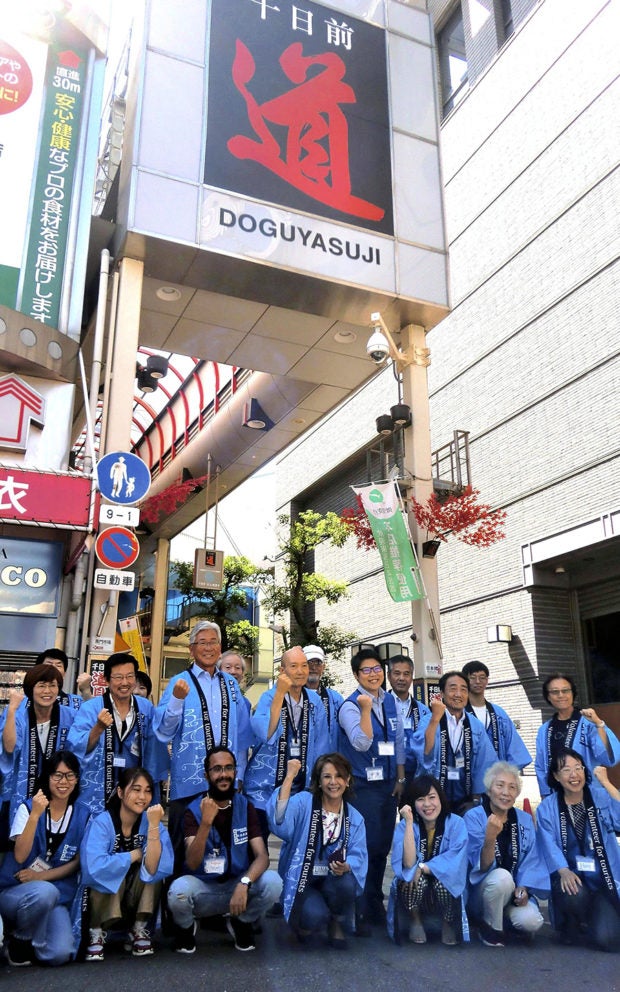 Volunteers and other program participants take a commemorative photo in the Minami district of Chuo Ward, Osaka, after an inauguration ceremony. The Japan News/Asia News Network

OSAKA — A group of volunteers for Osaka prefectural tourism who aim to help foreigners in front of train stations and around popular areas launched their activities last week.

According to the Osaka Convention and Tourism Bureau, they are the prefecture’s first certified volunteers to offer assistance to foreign visitors on the city’s streets.

On Sept. 3, volunteers gathered in Chuo Ward, Osaka, to commemorate the launch. At an inauguration ceremony, participants put on their new uniforms — blue happi jackets.

To ensure that the growing number of foreign visitors enjoy their stays, the Osaka Foundation of International Exchange, a public incorporated body, was commissioned by the prefecture to solicit applications for volunteers, who were selected based on document screenings and interviews. A total of 116 volunteers registered, ranging from 16 to 77 years old.

Services are offered in 11 languages including English, Chinese, Korean, Vietnamese, Arabic and Portuguese. About half of the volunteers are students, including international students.

About 30 people participated in the ceremony. Chairman of the foundation Hidetaka Yoshikawa greeted the volunteers, saying, “I want you to touch people’s hearts with your hospitality and help make Osaka’s tourism culture fruitful.” He then handed a blue happi with “Volunteer for tourists” written on it to a representative of the volunteers.

The volunteers work mainly on weekends, with teams of two covering the Minami district around Osaka Metro’s Nanba Station. They plan to actively approach foreign tourists and others who appear lost. Armed with tourist maps, iPads, radios and other tools, they offer explanations on things such as how to buy tickets, how to get to places, and where famous tourist attractions are located. They can also provide evacuation information in the event of a disaster.

Masako Tominaga, 77, the oldest volunteer in the group who will provide assistance in Chinese, said that she has worked in jobs involving giving technical assistance to people in China for many years. “I want to convey the charms of our area so travelers return home and say ‘Osaka was a good place,’” she said. “I’m also looking forward to encountering various people.”

Moaz Mohsen, 28, who lives in Suita, Osaka Prefecture, came to Japan from Egypt with his family about 20 years ago and will offer assistance in English and Arabic.

“I signed up to repay my gratitude to the Japanese people who helped me when I got lost when I first started living in Japan. I want to show the world the beauty of Osaka Castle and other places I love in Japan,” he said.

According to the foundation, 11.42 million foreign tourists visited the prefecture in 2018, more than triple the number in 2014.

The plan is to gradually increase the volunteers’ range of activities, eventually expanding throughout the prefecture. “We want to focus on promotions through social media and video, as well as overseas publicity,” a person in charge of the matter said.