China keeps penalties on US pork, soy, eases some others 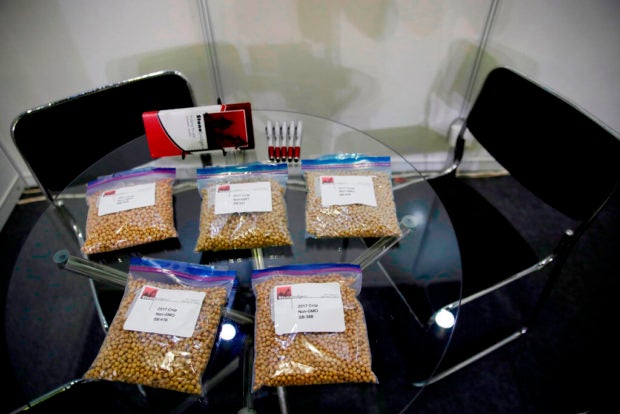 In this April 12, 2018, file photo, packets of raw soybeans are placed on a table at a U.S. soybean company’s booth at the international soybean exhibition in Shanghai, China. China has announced some U.S. industrial chemicals will be exempt from tariff hikes imposed in a trade war with Washington but maintained penalties on soybeans, pork and other farm goods. The Ministry of Finance’s announcement Wednesday, Sept. 11, 2019 came ahead of October talks aimed at ending the fight over trade and technology that threatens global economic growth. (AP Photo/Andy Wong, File)

BEIJING — China on Wednesday announced it will exempt American industrial grease and some other imports from tariff hikes in a trade war with Washington but kept in place penalties on soybeans and other major U.S. exports ahead of negotiations next month.

The move applies to raw materials for farmers and factories, suggesting Beijing wants to limit damage to its slowing economy from the fight with President Donald Trump over trade and technology.

It adds to indications that both sides might be settling in for extended conflict even as they prepare for talks in Washington aimed at ending the dispute that threatens global economic growth.

A list of 16 items including lubricants, fish meal for animal feed and some other chemicals will be exempt from penalties of up to 25% imposed in response to Trump’s tariff hikes on Chinese products, the Ministry of Finance said. Punitive duties on soybeans, the biggest U.S. export to China, and thousands of other items were left unchanged.

“The exemption could be seen as a gesture of sincerity towards the U.S. ahead of negotiations in October but is probably more a means of supporting the economy,” Iris Pang of ING said in a report.

Word that talks are going ahead has helped calm jittery financial markets. But there has been no sign of progress.

The two governments “are unlikely to reach a deal this year,” said Pang.

Chinese leaders are resisting U.S. pressure to roll back plans for government-led creation of global competitors in robotics and other industries.

Washington, Europe, Japan and other trading partners say those plans violate China’s market-opening commitments and are based on stealing or pressuring companies to hand over technology.

Washington and Beijing have raised tariffs on billions of dollars of each other’s products. That has battered farmers and manufacturers on both sides and fueled fears a global economy that already was showing signs of a slowdown might tip into recession.

China has raised duties on about $120 billion of U.S. products, economists estimate. Some have been hit with increases more than once, while about $50 billion of U.S. goods is unaffected, possibly to avoid disrupting Chinese industries.

In their latest escalation, Washington imposed 15% tariffs on $112 billion of Chinese products on Sept. 1 and is planning to hit another $160 billion Dec. 15. Beijing responded by imposing duties of 10% and 5% on a range of American goods.

Products covered by Wednesday’s exemptions include lubricants, insecticides and whey and fish meal for animal feed.

Chinese imports of U.S. goods tumbled 22.5% in August from a year earlier and exports to the United States, China’s biggest foreign market, fell 16%.

Beijing has agreed to narrow its politically sensitive trade surplus with the United States but is reluctant to give up development strategies it sees as a path to prosperity and global influence.

Talks broke down in May over how to enforce any agreement.

China insists Trump’s punitive tariffs must be lifted once a deal takes effect. Washington says at least some must stay to make sure Beijing carries out any promises.

Some analysts suggest Beijing might be holding out in hopes Trump will feel pressure to make a more favorable deal as his campaign for the 2020 presidential election picks up. Trump has warned China will face a tougher U.S. negotiating stance if he is re-elected. /jpv