In the latest survey conducted from June 22 to 26, those who personally witnessed vote-buying and other irregularities was at 10 percent, down from the 19 percent last recorded in June 2016.

Meanwhile, 2 percent of Filipinos said they personally witnessed the harassment of voters. This number also dipped compared to the 4 percent recorded in 2016. 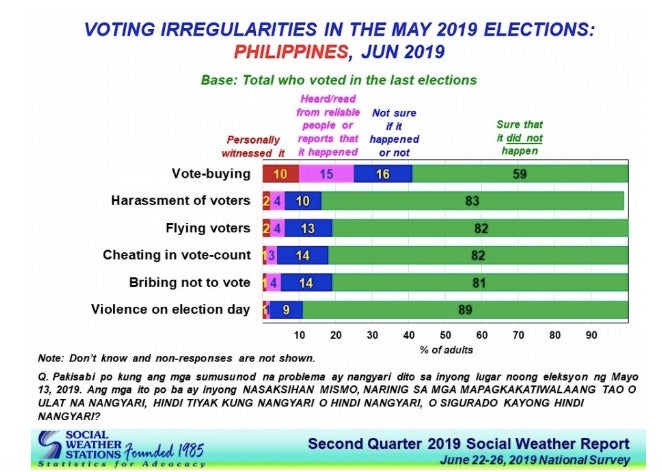 Asked about what problems they have encountered that pertained to voting, 53 percent of Filipinos said they witnessed long lines, while 16 percent said the vote-counting machines (VCM)  malfunctioned.

On the other hand, 35 percent of respondents answered that they did not encounter any problem while voting, while 1 percent did not answer.

The survey used face-to-face interviews of 1,200 adults nationwide, having 300 respondents each in Metro Manila, Balance Luzon, Visayas, and Mindanao. The survey also had sampling error margins of ±3 percent for national percentages. /muf