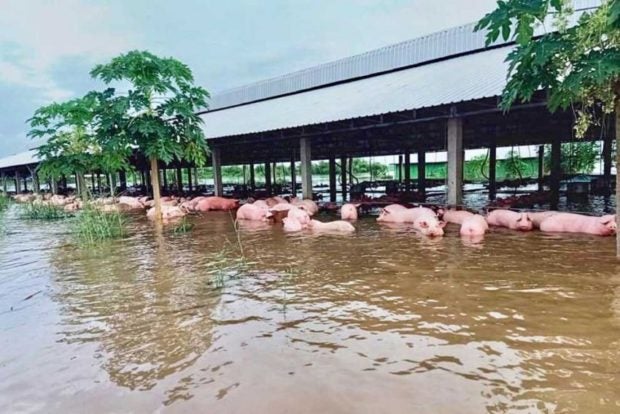 Farm owner Nornn Vanny told The Post on Tuesday that following immediate action by local authorities, over 1,000 of the 3,600 pigs raised at the farm in Srepreang village had been evacuated to higher ground.

Chab Koy, the director of the provincial Department of Water Resources and Meteorology, told The Post that as of Tuesday morning, the Stung Sen water level has reached 14.22m, well over the emergency level of 11.50m.

“Now, with the floodwaters flowing fast towards Kampong Thom province, the water level at the upper Stung Sen River has lowered. But much of the province’s low-lying areas will be submerged again if the rains continue,” he said.

National Committee for Disaster Management (NCDM) spokesman Keo Vy said on Tuesday that since September 3, over 500km of dirt roads and 60km of national and provincial roads have sustained serious damage due to the rising Mekong River and recent heavy downpours.

Citing data from the Ministry of Public Works and Transport, Vy said the 36 stretches of national and provincial roads that had been damaged were connected to 11 cities and provinces.

“However, damage assessment by the relevant institutions has not been concluded as some provinces have not submitted their report to the NCDM, while some other provinces have just been flooded,” he said.

While inspecting National Roads 3 and 33 that connect to Kampot and Kep provinces on Monday, Minister of Public Works and Transport Sun Chanthol said the two stretches will be the first to be repaired.

He said the roads were prioritised because the Kingdom will celebrate the annual Sea Festival in Kampot at the year’s end and host the 2020 World Bicycle Racing event in January.

“We have to ensure we can rebuild National RoadS 3 and 33 before the events,” he said.

Around 45,798 families have seen their homes submerged, with 6,893 of them evacuated to higher ground along with their 20,917 heads of cattle.

“This year’s floods have caused less damage compared to previous years because the relevant authorities worked hard to help the victims in time,” he said.

Vy said as of Tuesday, the floods had killed seven people – two men and five children aged 18 months to 11 years.

The Ministry of Water Resources and Meteorology on Tuesday forecast that the rains will continue to fall until September 15.

Read Next
Go: Next BuCor chief must be a ‘killer’
EDITORS' PICK
House energy committee chair Arroyo bats for cheap electricity
The Best Tech Gifts For The 2022 Holidays
Noche Buena items price hikes are justified and can’t be controlled – DTI official
The vivo Y16 makes the season of giving more thoughtful for the whole family
COA says over 4,000 pending audit backlogs will be resolved in 2 years
DBM releases P5.2 billion for 9.8 million beneficiaries of targeted cash transfer
MOST READ
Claudine Barretto asks for prayers as she undergoes thigh surgery
Trader duped by seniors in ‘Marcos gold’ investment
LOOK: Alyssa Gibbs finally marries fiancé five years after engagement
Jennifer Lopez recounts 2004 split with Ben Affleck: ‘I felt like I was gonna die’
Don't miss out on the latest news and information.