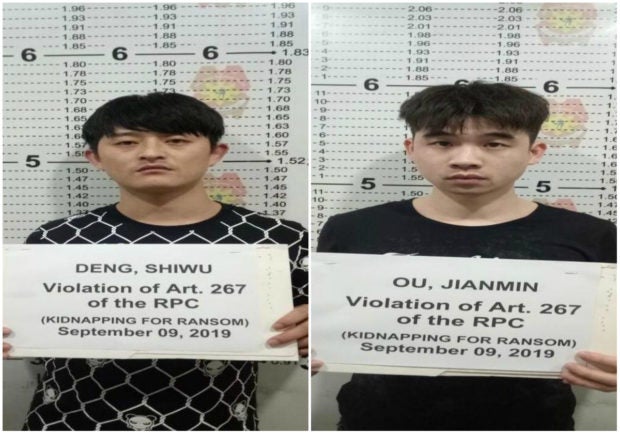 MANILA, Philippines — Operatives of the Philippine National Police (PNP) Anti-Kidnapping Group arrested two Chinese nationals for the illegal detention of two countrymen who failed to pay debt worth 1 million RMB (about P7.3 million) from a casino and resort in Parañaque City.

In a press conference on Wednesday, PNP-AKG spokesman Lt. Col. Elmer Cereno identified the arrested suspects as Deng Shiwu, 30, and Jiamin Ou, 28. Police said they are believed to be tourists.

Initial investigation showed that victims Li Ning and Yang Yang were playing bacarrat at the casino over the weekend when the suspects approached them and offered to pay 1 million RMB in exchange for casino chips. The suspects also offered to rent a hotel room for the victims.

On Monday, the victims, however, lost all their casino chips after gambling and returned to their hotel room to rest. After a few hours, Li woke up and tried to exit the room but Deng blocked the door.

The victims reported the incident to their friends in Beijing, China, who then called the management of the casino and resort for help.

The casino management then tipped operatives of the PNP-AKG who rescued the victims and arrested the suspects inside the said room.

According to Lt. Col. Villaflor Bannawagan, officer-in-charge of PNP-AKG, the suspects were involved in a loan shark scheme where casino players who fail to promptly pay debts are kidnapped.

With the rise of casino-related kidnappings, Cereno said they are constantly coordinating with management of casinos and other resorts to detect any suspicious incidents in their establishments.

The suspects are now under the custody of PNP-AKG while charges of kidnapping for ransom and illegal detention are being readied against them.   /muf