DENVER – Several Democratic presidential candidates are running on a promise to ban fracking — and stepping on unstable political ground as they do so. 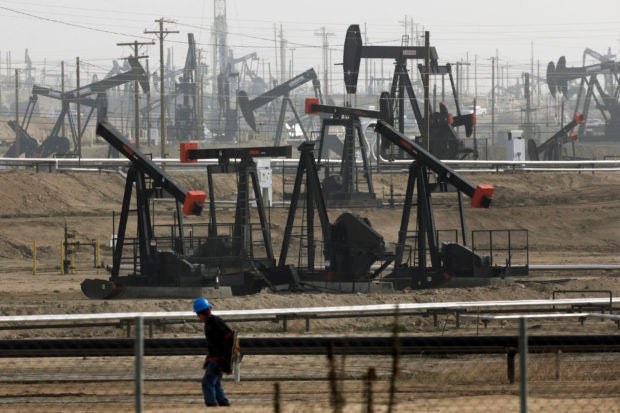 FILE – This Jan. 16, 2015, file photo shows pumpjacks operating at the Kern River Oil Field, in Bakersfield, Calif. Some Democratic presidential hopefuls are calling for fracking bans. It may play well with some of the party’s base, but it could be risky. (AP Photo/Jae C. Hong, File)

An all-out prohibition on the controversial natural gas extraction process — backed by Sens. Kamala Harris, Bernie Sanders and Elizabeth Warren — has been well received by the liberal and climate-focused voters closely watching the primary. But the proposal also threatens to antagonize unions and voters in areas that depend on oil and gas for jobs.

That opposition may be fiercest in some of the states Democrats care about most. Banning fracking could have a dramatic impact on the economy in Pennsylvania, a state Democrats consider a must-win in their pursuit of the White House. It could also jeopardize the party’s hold on Colorado, a swing state trending its way, not to mention Democrats’ dreams of winning statewide in Texas, the headquarters of the energy industry and home to 137,000 natural gas wells.

The candidates’ support for a ban is one of the clearest examples of the party’s move to the left in its 2020 primary. Only a few years ago, President Barack Obama celebrated the benefits of fracking — welcoming the energy independence and lower costs that come from an increase in domestic production.

To address environmental concerns, his administration focused on tighter regulation of fracking on federal land but largely steered clear of the state-level battles over whether the practice was dangerous, dirty or accelerating climate change by encouraging dependence on fossil fuels. Even most environmental groups have advocated for regulation, not an all-out ban.

But climate advocates have enjoyed growing influence in the primary, as the party’s base is increasingly focused on climate change and searching for immediate and meaningful policy solutions — even if the political path for those ideas is unclear.

“To say that you would ban fracking is a very difficult position to take in some key states,” said Rick Ridder, a Democratic strategist who worked as Howard Dean’s 2004 presidential campaign manager and fought fracking in Colorado. “There’s an extremely important distinction between local control and banning something.”

In climate change town halls last week, Harris, Sanders and Warren called for bans on fracking. Others, like former Vice President Joe Biden and the two Texans in the race — former Secretary of Housing and Urban Development Julián Castro and former Rep. Beto O’Rourke — have balked at such a step, which some campaigns acknowledge would require legislative action.

The politics of hydraulic fracturing, or fracking, are highly volatile. The process involves injecting chemicals into the earth to free natural gas trapped in rock.

The technology has enabled energy companies to drill in previously inaccessible areas, including in suburban neighborhoods where new gas wells can cause opposition that defies traditional partisan lines. Active energy wells can crush property values and fan fears of contaminated drinking water, air pollution and even earthquakes, which some studies link to fracking.

Some environmentalists argue that fracking’s poor polling shows Democrats aren’t taking a political risk by calling for a ban now. “Climate change and the environment are going to be stronger issues for Democrats,” said Mitch Jones of Food and Water Action. “Even in a state like Pennsylvania, taking a strong stand will help whoever is the Democratic nominee.”

At the same time, jobs created by fracking have been a boost to some labor unions. The activity helps the economy and lowers energy costs. A study in 2015 from the nonpartisan Brookings Institution found that households gained $200 from fracking just from lower gas prices alone.

Mike Mikus, a Democratic strategist in Pennsylvania, recalled an uproar in his own historically Republican Pittsburgh suburb when the school district proposed leasing land for fracking.

Meanwhile, the state’s fracking boom has led to the construction of a massive energy plant northwest of the city that has created thousands of construction jobs and was the site of a rally by President Donald Trump last month. The president touted the economic benefits of fracking, which have extended not just to Pennsylvania but also to neighboring West Virginia and Ohio.

Mikus said it’s hard to predict the outcome of a Pennsylvania election in which the Democrat wants to end fracking because no Democratic nominee has ever run statewide with that platform before. Democrats who have called for fracking bans have lost statewide primaries.

“I can’t say it eliminates the chance of someone winning, but it makes it tougher,” Mikus said.

Labor is skeptical. “The issue is economics. People vote with their pocketbooks,” said Rick Bloomingdale, president of Pennsylvania AFL-CIO. “People have got to have a solid financial footing before they think about other issues.”

In Colorado, Democrats won a major battle to rein in fracking after Democratic Gov. John Hickenlooper, an ex-petroleum geologist, left office. Its new Democratic governor, Jared Polis, has helped finance efforts to fight fracking and complained about an energy company building a well next to land he owns in northern Colorado. After Democrats took over the state legislature in November, they pushed through a bill that allows local governments to regulate energy exploration within their boundaries. /gsg