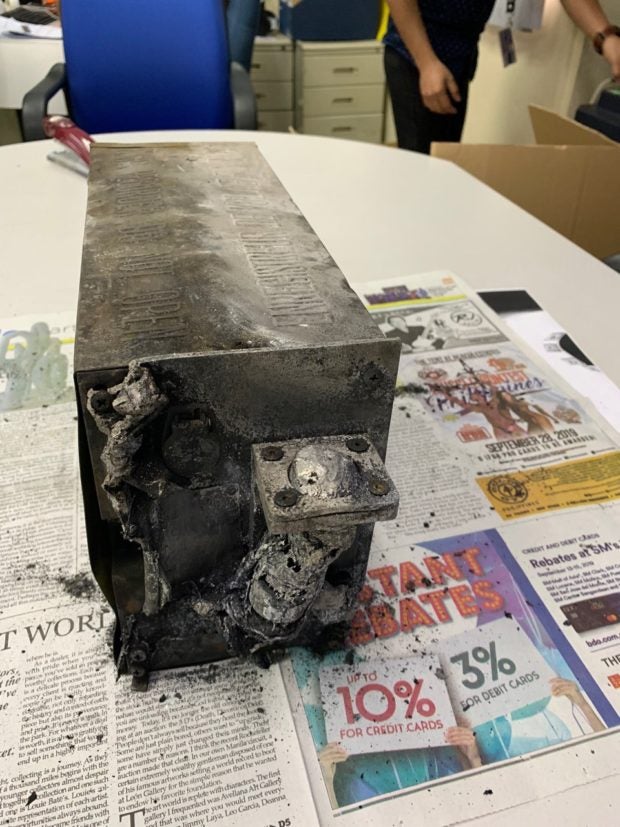 Authorities will send to Australia for decoding the voice recorder of the Beechcraft King Air type (BE350) that crashed in a resort in Calamba City, Laguna, killing nine people onboard. PHOTO from CAAP

SAN PEDRO CITY –– Air crash investigators were set to leave for Australia, where there is available technology, to decode the voice recorder retrieved from the medevac (medical air evacuation) plane that crashed and killed nine people in Laguna.

Eric Apolonio, spokesperson of the Civil Aviation Authority of the Philippines (CAAP), on Tuesday, said investigators and representatives of Lionair, the operator of the Beechcraft King Air type (BE350), were set to leave once their travel documents were ready.

Apolonio said the voice recorder, although “badly burned” when found in the crash site in Barangay Pansol, Calamba City, may still be “decoded” in hope of shedding some light on the September 1 incident.

The light aircraft that carried a medical team flew from Dipolog City in Zamboanga del Norte to Manila when it crashed midway and hit a private resort in Laguna.

All passengers, among them the New Zealander patient Tomm Carr and his Filipino wife, Emma, died.

Apolonio said the parts of the aircraft recovered from separate locations in Barangay Pansol were brought to CAAP’s hangar over the weekend for the “reconstruction” as part of the crash probe.

Unfortunately, he said, the Philippines does not have the facility to decode the voice recorder. Its content is seen as crucial in determining whether the crash was caused by mechanical failure or human error.

“It may take some time,” said Apolonio, adding that CAAP could not penalize the airline until the investigation is concluded. /lzb