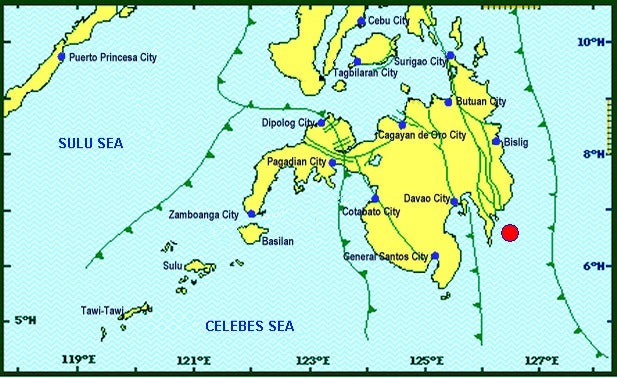 Image shows the epicenter of the 4.8-magnitude earthquake that jolted Davao Oriental on Tuesday afternoon, September 10, 2019. Image from Phivolcs

The quake, which was tectonic in origin, had a depth of 45 km.

Phivolcs earlier reported the quake at magnitude 5.3 but later raised it to magnitude 5.8.

However, the US Geological Survey documented it as a magnitude 5.6 tremor with its epicenter 23 kilometers southeast of Mati City.

The temblor was felt in Davao City at Intensity 4, which prompted evacuations in major establishments, schools, and hospitals.

The main tremor was followed by a succession of weaker quakes at 3.2, 2.5, and 2.1 magnitudes, also in Governor Generoso town.

Phivolcs said no damage were recorded due to the temblor but aftershocks are expected following the quake. /jpv  /lzb  /je