Aquino: Learning’s over; we’ll do better in 2012 | Inquirer News 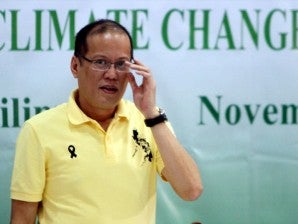 MANILA, Philippines—Saying he had now gone past the “learning curve,” President Aquino on Thursday said he expected to do better in 2012 than this year.

Asked what he was looking forward to in the next 365 days of his six-year term as chief executive, Mr. Aquino said he hoped that the country would weather the global economic crisis and that his bid to institute what he called reforms in the judiciary would move faster.

“Well, No. 1, we’re hoping that we will be able to weather the current economic storm; that we will do a lot better than what we did this year,” the President told reporters after welcoming back home returning overseas Filipino workers at the Ninoy Aquino International Airport, which has become a traditional activity in the presidency.

“And we are done with the learning curve. We’ve already put in place many systems that should correct the issue with regards to making sure that corruption is being combated,” he added.

In wishing for faster reforms in judiciary, the President said, “A lot of our problems had to deal with various courts this past year.”

Mr. Aquino has recently launched a series of attacks on Chief Justice Renato Corona after the Supreme Court granted former President Gloria Macapagal-Arroyo’s motion that the government be restrained from barring her from leaving the country despite facing a complaint of electoral sabotage.

Corona is scheduled to undergo an impeachment trial before the Senate in January after Mr. Aquino’s allies in the House of Representatives overwhelmingly voted to endorse the articles of impeachment against the country’s top magistrate.

Asked earlier this month before a news forum what his top wish was for 2012, the President said: “Of course, if I can maintain the goodwill and the support that the people have been giving me, that is really such a tremendous gift and I hope to be deserving of the same.”

The latest Social Weather Stations survey contains some good news for the President in this matter. He is ending the year with a “very good” satisfaction rating, according to the poll outfit’s survey.

However, the poll was conducted from Dec. 3 to Dec. 7, before the President was assailed for attending the Christmas party of the Presidential Security Group at a time when people in Cagayan de Oro and Iligan and other areas were struggling with the aftermath of the killer floods that claimed the lives of over 1,000 persons.

The December figure is below Mr. Aquino’s personal record high of +64 obtained in November 2010, only five months into his term. (With a report from Ana Roa, Inquirer Research)