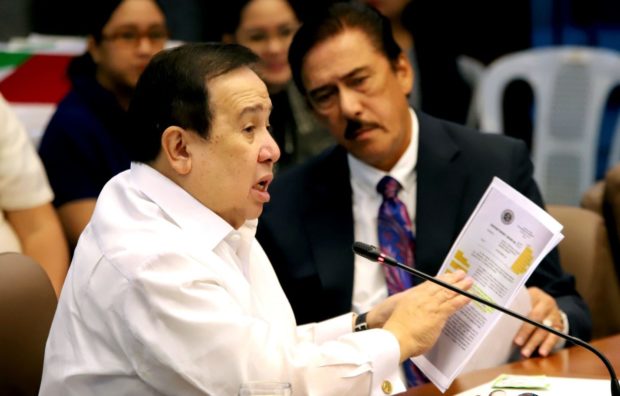 Sen. Richard Gordon (left), chair of justice and blue ribbon committees, confronts officials of the Department of Justice (DOJ) and the Bureau of Corrections (BuCor), as Senate President Vicente C. Sotto (right) III looks on, on the existence of Department Order Nol. 953, which requires the approval of DOJ secretary in releasing from prison heinous crime convicts. (Photo from the Senate Public Relations and Information Bureau)

Gordon, who led the Senate justice and human rights committee inquiry on the GCTA law, pointed out how the phones of Corrections Officer III Veronica Buño and Corrections Senior Insp. Mabel Bansil were stripped of call records.

This, the senator said, implied that they were hiding something.

“So you can see they deleted everything. So they’re really hiding something,” Gordon, speaking in Filipino, told reporters in an interview when asked if there was anyone who lied during the probe.

“That shows that it is happening — that they would ask for money and then they would erase [the phone records] so there will be no evidence. That’s obstruction of justice,” he added.

He said it could not be assumed that deleting phone records could be just a “habit,” as earlier reasoned by Buño during the hearing, as she and Bansil did it.

“The two of them? Do they have the same habit? Are they partners? Impossible,” he said. “I told them: Just tell everything because your answers speak the fact that you’re lying.”

During the inquiry, witness Yolanda Camilon, a common-law wife of Godfrey Gamboa, an inmate at New Bilibid Prison (NBP) who earlier bared BuCor officials were offering to release convicts on good behavior for a fee, also presented a phone call recording with Buño.

However, Buño denied it was her.

Senate President Vicente Sotto III said during the hearing that he would have the recording checked by the Department of Information and Communication Technology, in particular, through its chief, Secretary Gringo Honasan, for authenticity.

Gordon also said that he would also have the recording checked as Buño could already face perjury if could be proven it was indeed her in the recording.

However, he said that the recording itself could be inadmissible in the buildup of their case against the BuCor officials as it could fall under wiretapping.

“I don’t think it will be acceptable because she was tapped. I’m not sure. I might look at the law, but I think that’s forbidden fruit syndrome, the fruit of the poisonous tree,” he said. “But again it goes into the credibility of the witness.”

The senator said he had already ordered the National Bureau of Investigation (NBI) to retrieve the deleted messages of the phones of Buño and Bansil.

All BuCor officials could face charges of perjury if proven that they were indeed lying about their involvement on the GCTA-for-sale scheme, Gordon said.