UK worries Brexit could bring ‘chlorinated chicken’ from US 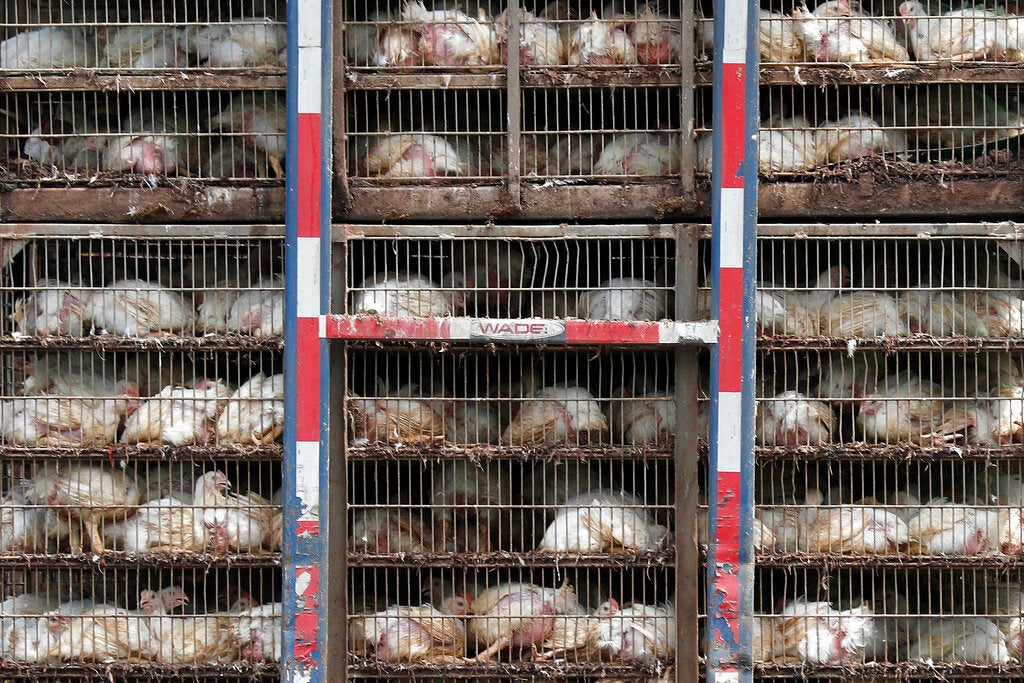 Chickens are shipped for processing in Morton, Mississippi.   The use of antimicrobial washes and sprays is widespread in the U.S. chicken industry, with companies applying them to kill germs at various stages in the production process. (AP)

The European Union has long refused to import poultry from the United States that is routinely rinsed with chemical washes to kill germs. But the United Kingdom’s planned exit from the EU is putting the practice back in the spotlight, with Prime Minister Boris Johnson even taunting Labor Party leader Jeremy Corbyn by calling him a “chlorinated chicken.”

The term has come to sum up concerns that Britain could be pressured to accept looser food safety standards when negotiating its own post-Brexit trade deals.

Unlike in the EU, the use of antimicrobial sprays and washes is widespread in the U.S. chicken industry. Companies apply them to kill germs at various stages during processing, such as when carcasses are de-feathered, gutted or any other point when feces could splatter and spread germs like salmonella. The chemicals used in rinses have to be approved by the U.S. Department of Agriculture, and their use is limited to specified amounts. The agency says the rinses are present in finished products at insignificant levels.

The U.S. chicken industry says the use of chlorine has declined to about 10% of the country’s plants, as other chemicals have become more common. It says the rinses help improve food safety, but that it’s difficult to completely rid raw chicken of salmonella and campylobacter germs, which don’t sicken birds and are commonly found in their guts.

Campylobacter (kam-pih-loh-BAK’-tur) isn’t widely known in the U.S. but is a major cause of food poisoning.

Critics of food safety regulation in the U.S. say the use of antimicrobial washes and sprays underscores how widespread the bacteria are in raw chicken, especially considering the persistence of food poisoning outbreaks. Tony Corbo of Food and Water Watch, a group that has called for stricter meat regulations, said the rinses could be used to mask broader sanitary problems during production.

Though it’s legal to sell raw chicken with salmonella and campylobacter in supermarkets, the USDA tries to control germs with standards on how much can be in the raw chicken tested at processing plants. The salmonella standard is around 10% for whole bird carcasses, and about 15% for raw chicken parts, which have a higher chance of being exposed to feces during chopping.

It’s why health officials stress the need for safe handling of raw poultry, such as thoroughly cooking the meat to kill potential germs. They also warn people should not rinse raw chicken, which can spray bacteria everywhere.

Germs in raw chicken are an issue in the U.K. too. Health officials have been working to lower rates of campylobacter, which is the most common cause of food poisoning in the country. But testing in 2017 found its presence in more than half of raw chicken sold in stores.

In a statement, the U.K.’s Food Standards Agency said chlorine washes can be used on fresh produce like salad, but not on meat or animal products. It noted only water can be used to remove surface contamination from poultry carcasses in EU countries.

Those rules will stay in place after the U.K. leaves the EU, the agency said, and any potential change would involve “a rigorous risk assessment.”

Timothy Lytton, a professor of law who researches food safety at Georgia State University, noted antimicrobial washes are used for other foods in the U.S., including produce. And he said their use with raw chicken might be because of the massive scale of the country’s poultry production, which might make approaches used in other parts of the world impractical.

Still, Lytton said. worries in the United Kingdom and Europe about “chlorinated chicken” underscore larger anxieties about the ongoing industrialization of the food supply.

“People are anxious about the fact that industry is making their food,” he said.