El Deposito to be opened to public in 2020

19th-century underground water reservoir in San Juan City is ‘one of the remaining large Spanish artifacts in the world’
By: Matthew Reysio-Cruz - @inquirerdotnet
Philippine Daily Inquirer / 05:01 AM September 09, 2019 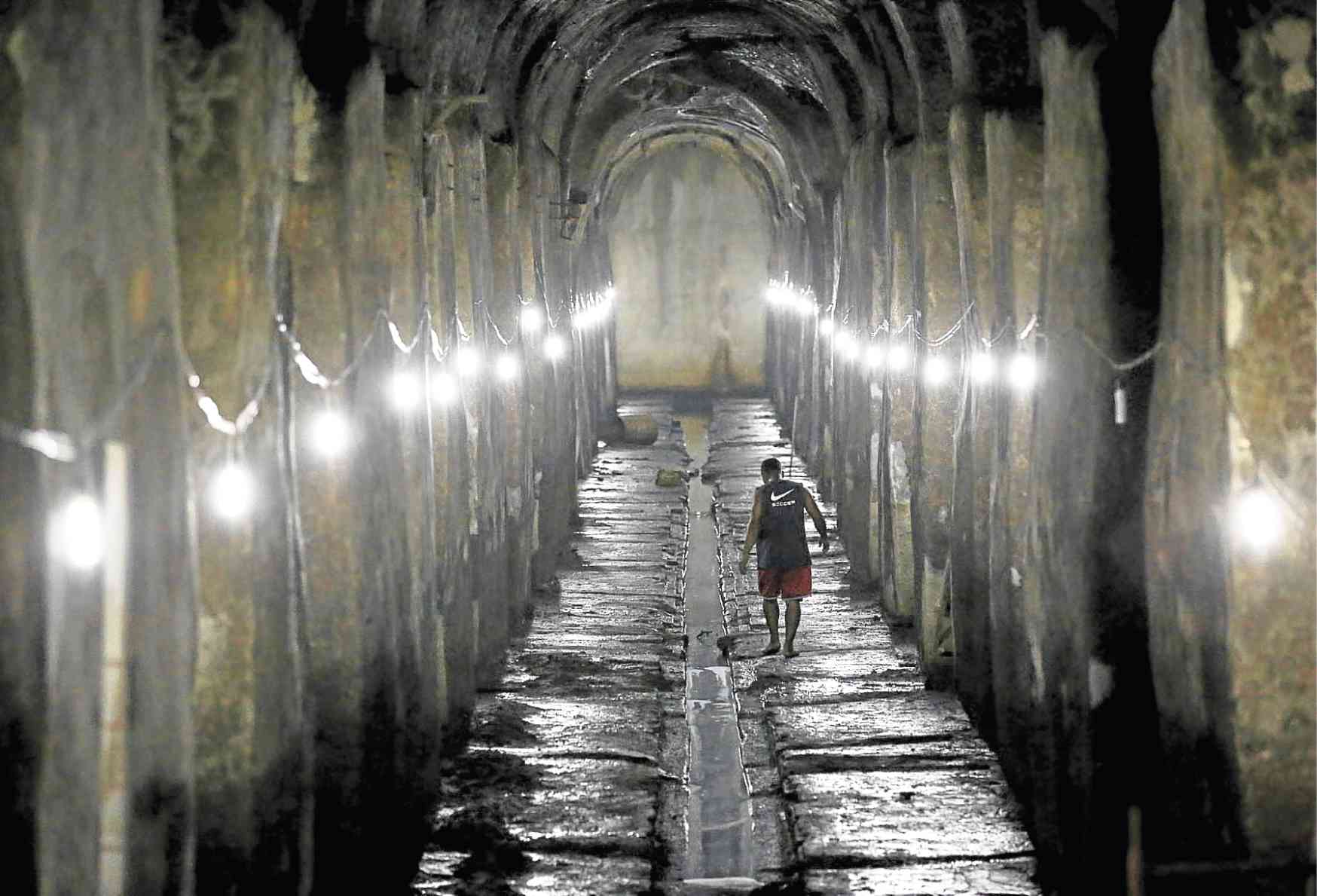 WALK BACK IN TIME A 150-meter stretch of El Deposito has been cleared of mud and garbage in preparation for its launching as a tourist site. —PHOTOS BY LYN RILLON

In what would be a high-stakes battle later traced as the catalyst for the 1896 Philippine Revolution, Bonifacio and the Katipuneros tried to wrest control of an unassuming target: El Deposito, the country’s first water reservoir.

Its seizure, they reasoned, would deprive Manila’s 285,000 residents, including high-ranking Spanish officials, of water, bringing the capital to its knees and setting the stage for a speedy takeover.

Bonifacio and his men ultimately suffered a bloody defeat before even reaching El Deposito. But the breadth of the body count hardly deterred future assaults on the reservoir, which would endure for years as a prized conquest and potent symbol of power.

The sprawling network of underground tunnels, however, has fallen victim to both war and neglect. The National Historical Commission of the Philippines (NHCP), Department of Tourism and San Juan City government are hoping to change that.

Mayor Francis Zamora told the Inquirer the NHCP was targeting to open the labyrinth of tunnels to the public for the first time early next year. The NHCP began a wide-scale cleanup in 2018 of El Deposito, located under what is now the vast Pinaglabanan Memorial Shrine grounds in San Juan.

The reservoir, according to El Deposito Museum curator Katherine Oliveros, has a history so rich that it could one day achieve—or even surpass—the stature of some of Manila’s most iconic tourist attractions, including the walled city to which it once supplied water.

“El Deposito could be like Fort Santiago and Intramuros of Manila, because it really is distinctive,” Oliveros said. Zamora was equally excited for the little-known site to finally have its time in the spotlight, hailing it as “one of the remaining large Spanish artifacts in the world.”

When El Deposito was inaugurated in 1882, the structure — built with molave wood, cut stones from Meycuayan, Bulacan province, and Australian-imported coal — was revered as a singular feat of engineering and architecture, even more notable for the century it took to make it a reality.

The reservoir was the central organ of the Carriedo waterworks system, named after Francisco Carriedo, who arrived in Manila in 1722.

He accrued tremendous wealth through the galleon trade, and in 1783, gifted P10,000 to the Manila Ayuntamiento for the construction of a waterline.

But his initial proposal was rejected and it wasn’t until 1869 that an engineer, Genaro Palacios, began planning a waterworks project that could utilize the fund. 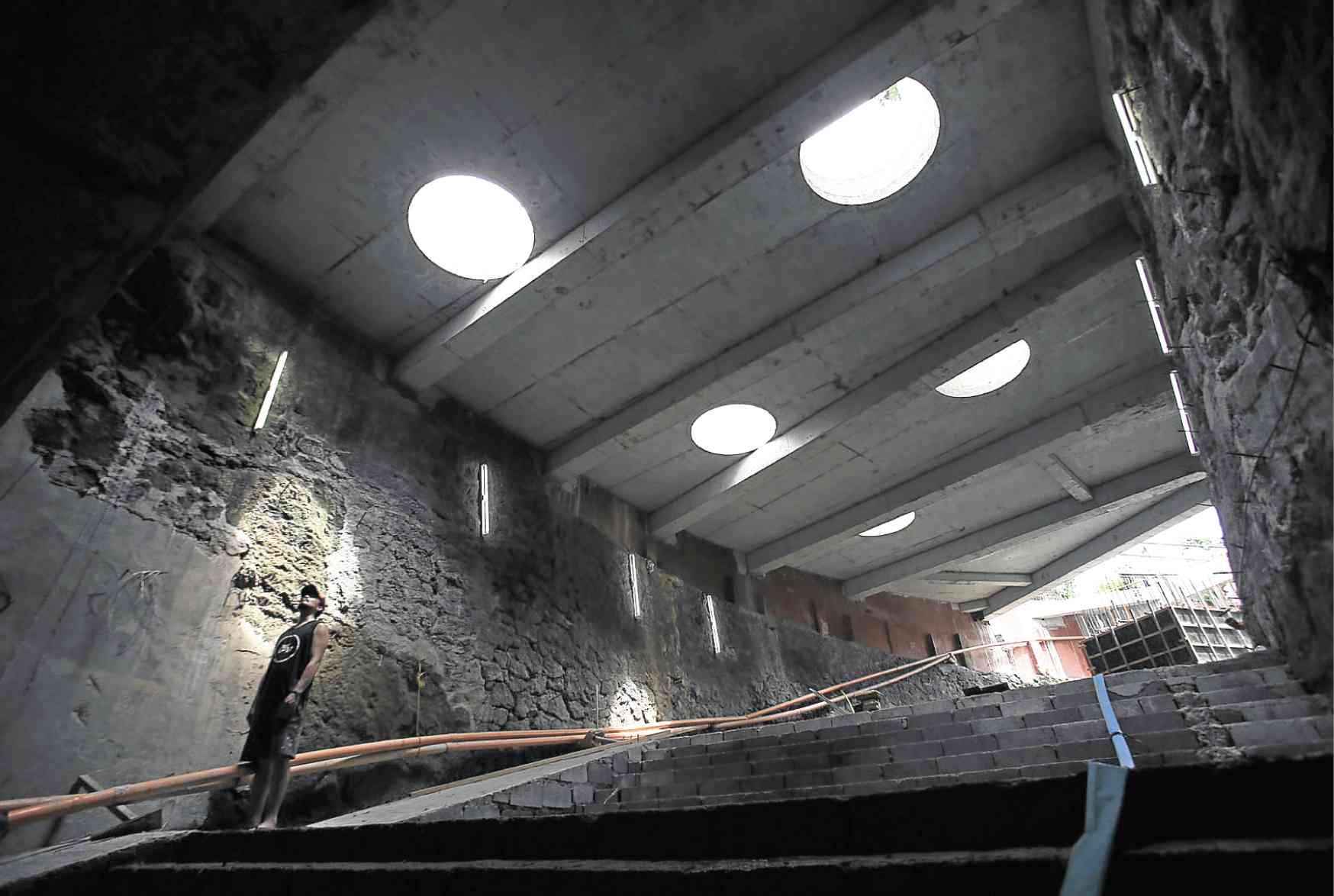 AIR VENTS A worker stands under one of the five vents created near the entrance to El Deposito. The vents will be equipped with exhaust fans to draw in fresh air.

The project would become the Carriedo waterworks system, which pumped water from the present day Marikina River to Santolan, where water flowed through 5-kilometer cast iron pipes toward El Deposito.

The reservoir — which had a budget that added up then to P110,000 — was composed of a cavernous central canal that connected 25 smaller ones, each 5 meters high and 3 meters wide.

Altogether, it had a capacity of 56,000 cubic meters—meaning the water that coursed through the reservoir’s gates and cascaded down its steps like tiny waterfalls could supply up to 300,000 people.

Not your average design

“It wasn’t just any average engineering design that was used for El Deposito. Filipinos should be proud we have something like this,” Oliveros said.

Its strategic placement on an elevated hill at the heart of Manila, along with the expansiveness of its tunnel network, also made it a tempting target for both sides of multiple wars and conflicts.

“El Deposito tells the story of Philippine history,” Oliveros said. “Through the times, everyone has used it for something different.”

Though it has been relegated to the peripheries of history books, the reservoir’s dimly lit tunnels and sturdy Roman aqueducts do indeed tell a dramatic story of conquest and bloodlust, capturing the outsize imprint of colonialism on the country.

El Deposito functioned for its intended purpose of supplying water for just a tiny fraction of its 137-year history. After it switched hands between Filipino revolutionaries and Spanish officials in the late 1890s, the Americans seized it and made it a depository for weapons. 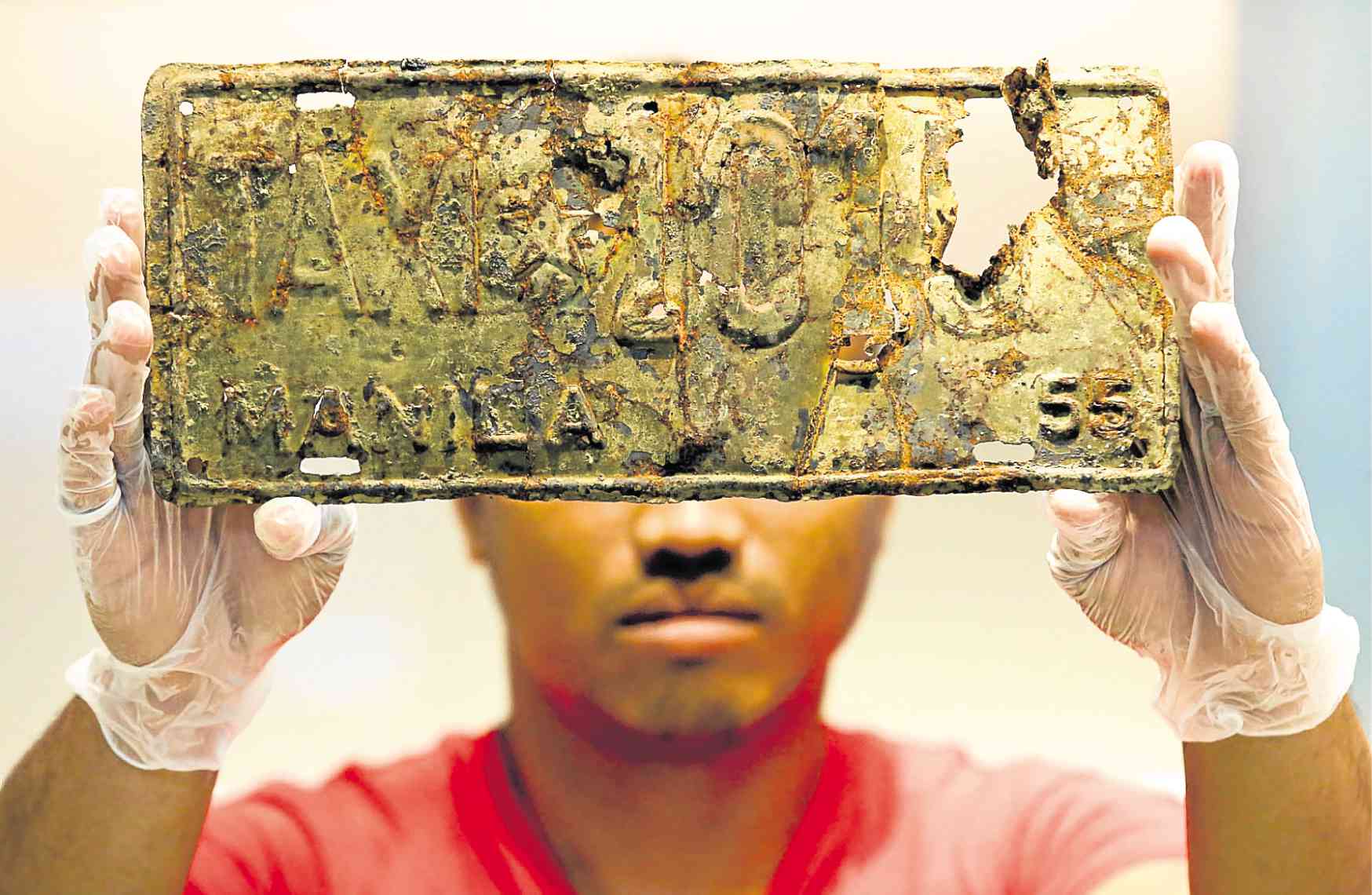 OLD RELIC A license plate from 1955 was one of the items excavated from the site last month.

During this time it was heavily militarized, and in 1903, the Americans officially refashioned it as an Army headquarters. It would go on to play a central role in the fight between the United States and Japan in World War II after the Japanese took control and used it as storage for ammunition.

The Americans recaptured it in 1945, but only after a protracted battle that decimated much of the above-ground structures. The country’s independence ushered in a gradual diminishing of El Deposito’s stature as large dams took over the job of supplying water, and it acted for decades as a dump.

It wasn’t until 2016 that serious efforts began to restore a measure of its former glory, when the University of the Philippines Archaeological Studies program conducted a sweeping assessment and excavation, followed by the NHCP cleanup two years later.

Its opening as a tourist site early next year will hopefully mark, at long last, an era of stability for the battle-scarred El Deposito. 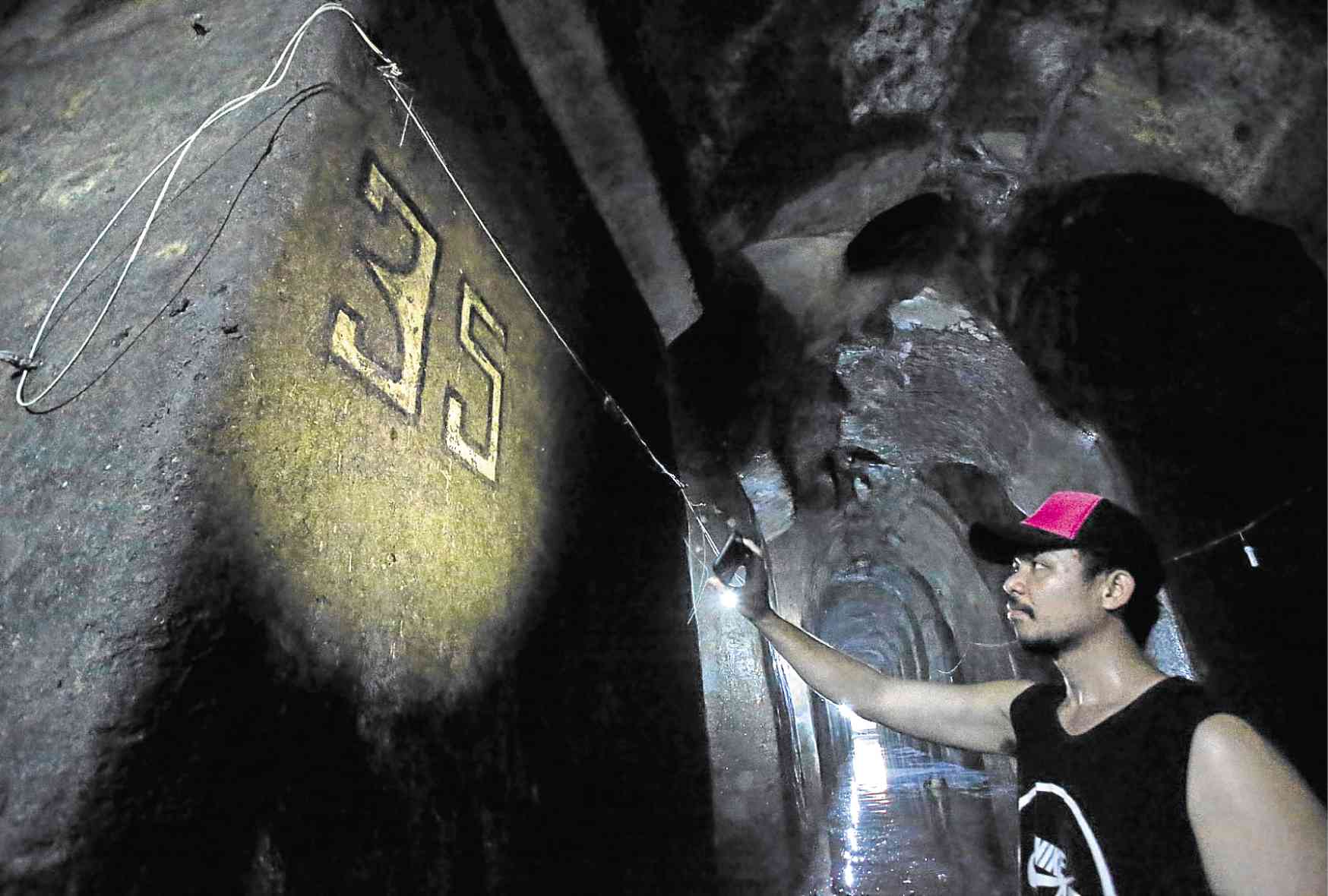 AMMO STORAGE Numbers were painted on the reservoir’s tunnels by American forces that used El Deposito as an armory.

Tourism Secretary Bernadette Romulo-Puyat has already pledged her department’s support in promoting the historical site, according to Zamora, as part of a broader push to elevate local destinations beyond the country’s world-famous beaches.

“Once complete, people can go down and walk inside and view the aqueducts, [which are still the originals from 1882],” Zamora said. “It will allow people to go back in time.”