(Editor’s Note: The identities and assignments of the soldiers in this report are kept vague in order to protect their privacy.) 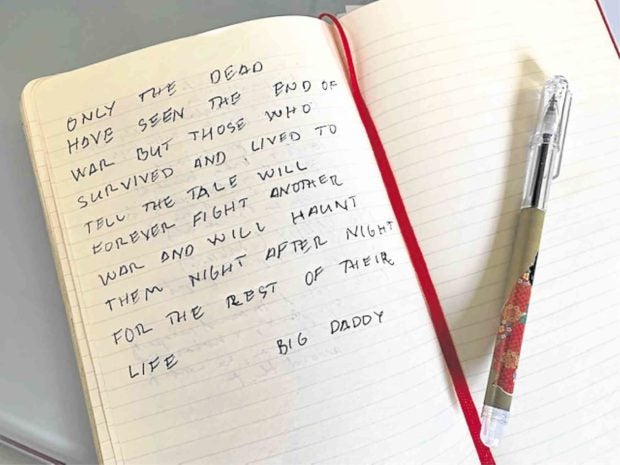 One month into the siege of Marawi City in 2017, “Big Daddy” started showing symptoms of post-traumatic stress disorder (PTSD), which occurs when someone who experiences or witnesses a harrowing event is unable to recover from the distress.

Big Daddy himself nearly died when a terrorist’s bullet hit him in the neck. The wound has long healed but he has yet to fully overcome the trauma of that gunfight.

A month after Big Daddy’s emergency surgery, his CO began appearing in his dreams, telling him to get up, they had something to do: “Bumangon ka, lalakad tayo.”

Thenceforth he was able to sleep for only two to three hours, usually in the day. There were intrusions—sudden and involuntary mental images—of his CO dying, gasping for air.

Speaking in Filipino and English, he said: “It was like a stain that I wanted to rub off. I would not tell my wife and three children when I visited. I didn’t want them to have a different view of me. I said I was doing office work the whole time.”

Back at the camp, Big Daddy would hide in his assigned foxhole and scream. His weight dropped from 78 to 56 kilos.

“For one year I was not aware I had PTSD until nagwala ako sa kampo,” he said, recalling the day he lost it. “I beat up a friend and I cannot recall what happened.”

In October 2018, around the first anniversary of the Marawi siege’s end, Big Daddy arrived at the mental health department of V. Luna General Hospital in Quezon City. The hospital is considered an “Echelon 4” military health facility that can provide the “highest level” of medical care and rehabilitation for soldiers.

He managed to keep his confinement a secret from his family until a friend who did not seek permission took his photo from the hospital and posted it on social media.

After 11 months of treatment, Big Daddy can now sleep soundly for eight hours.

But there’s something bothering him these days. Scheduled for discharge next month if he passes the necessary tests, he worries about how other soldiers will react when he returns.

He foresees the bullying that will happen if his comrades dismiss him as “baliw”—crazy.

So he is studying, and considering investing in, a business where customers insert coins into computers for humble increments of surfing time. 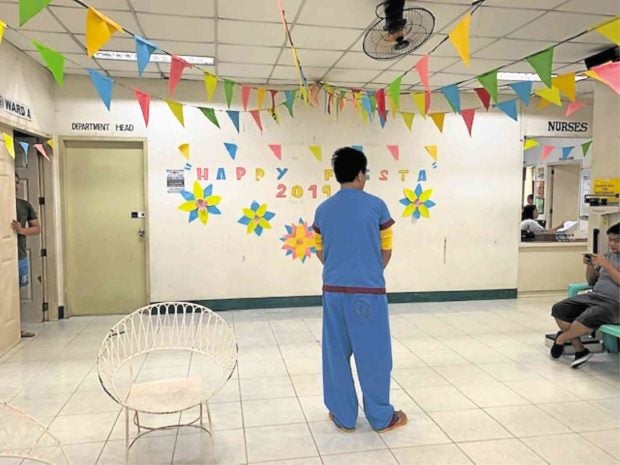 INDELIBLE STAIN The soldier, who initially hid his symptoms of post-traumatic stress disorder (PTSD) from his family after seeing action in the 2017 Marawi siege, and who asked that he just be called “Big Daddy” in this report, has spent 11 months undergoing treatment at V. Luna military hospital in Quezon City. —PHOTOS BY CATHY CAÑARES YAMSUAN

“I’m just focusing on learning Wi-Fi vendo instead of fretting about being bullied,” Big Daddy said. “As of now, I’m still not ready to leave. I might go back to the military but I want to make sure I’m really OK when I leave.”

Mental health professionals who tend to soldiers with PTSD recognize the stigma attached to it.

Maj. Jose Lorenzo Rollo, a military psychiatrist at V. Luna, said confinement in the mental health department attached much baggage to a patient.

“There is a prevalent mentality, and not only among soldiers, that someone who receives psychiatric care is crazy,” Rollo said. “The soldiers know it, and that stresses them more. They could be isolated when they return to work. They feel they are not trusted or are given only limited work, unlike before. There are a few cases here of patients who were readmitted because of that.”

“Refusal to seek help or consultation … makes it more difficult to identify what bothers them [and] makes it difficult for us to fully treat the patient,” V. Luna psychologist Mara Calagui said.

“Some cannot even admit to having those flashbacks when they are already exhibiting other PTSD symptoms like difficulty sleeping, irritability and hypervigilance,” she noted.

“It’s because we wear a uniform, Ma’am,” she quoted some as saying.

Mental health patients in V. Luna spend nothing for treatment because the Armed Forces of the Philippines covers all expenses. This is unlike a patient seeing a psychiatrist in private practice who charges an average of P2,500 per session.

V. Luna accepted 23 soldiers suffering from PTSD after seeing action in Marawi. This is “less than 10 percent” of all patients in the hospital who were confined for various reasons at the height of the siege, Rollo said, adding that aside from Big Daddy, only two more patients who acquired PTSD in Marawi remained in V. Luna.

There are a little over 80 patients in Rollo’s department now. He said they were handling more cases of depression and anxiety than PTSD among soldiers.

Doctors and other trained professionals involved in the mental health of Filipino soldiers usually observe two steps to help them cope with combat stress.

Explained De Jesus: “Within the smallest units of the Army, soldiers are taught to identify symptoms of PTSD like changes in behavior or difficulty in sleeping. We also teach them about the referral system so they are equipped [to alert higher officers]. Your buddy is trained to see if you have PTSD symptoms.” 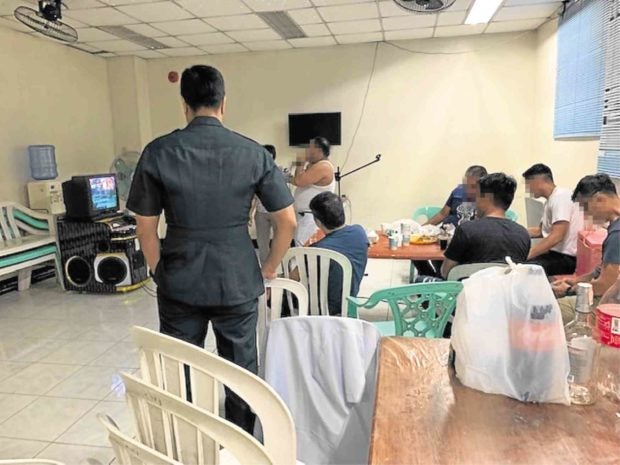 HEALING SESSION Soldiers being treated for PTSD at V. Luna General Hospital enjoy “Happy Hour” on Friday afternoons. Alcohol is prohibited but turns at the microphone are virtually unlimited.

Psychological first aid is followed by stress debriefing, which V. Luna psychologist Carrol Lyn Rosal described as “more of a group discussion or interaction where trained facilitators can conduct interventions [and] soldiers are allowed to discuss their feelings, reactions and how to cope with that kind of stress.”

De Jesus and other Army professionals travel all over the country to teach psychological first aid to soldiers. V. Luna’s mental health team also do psycho-education missions so that a distressed soldier’s colleagues can keep an open mind and develop more empathy toward him.

But there are stumbling blocks, such as the sore lack of personnel. Handling V. Luna’s patients are three psychiatrists, three psychologists and eight residents. The hospital needs two more psychologists to ease the load.

The military’s three main branches—Army, Navy and Air Force—each have either one psychiatrist or one psychologist only.

Calagui, who conducted research in PTSD among soldiers, said V. Luna’s psycho-education efforts would be greatly boosted if more mental health professionals visited military camps and other venues. Also the hospital would easily attract licensed professionals if it could match, or at least offer salaries close to, the earnings of private practitioners.

Rollo said the AFP was now addressing the need for more medical corps officers to meet the required troop ceiling.

Rosal wished that the government would also look into the situation of soldiers, especially the lowly paid. She described the low-ranking soldier’s dismal pay as “contributory to anxiety and depression.”

“They share these stories during stress debriefing,” she said in a mix of Filipino and English. “While out there is Marawi, the wife calls to say the baby has no milk or there is no tuition for a child. Or the children study just anywhere—because how much are soldiers paid? You can see the families of soldiers staying in slum areas because they cannot afford to buy a house.”

She added: “They also resort to many loans. Or they help [communities] … while their families are also suffering during floods and earthquakes back home. We expect our soldiers to be strong physically and mentally, when they [actually] feel like killing themselves.”

Rosal and Fuentes said those crafting the government budget should think beyond weapons when formulating the AFP’s next annual appropriation.

“The government provides weapons but after a war, soldiers should be provided aftercare to determine if they can still function,” Fuentes said, suggesting that the government could take a more proactive role in seeing to the welfare of those in charge of protecting civilians.

Rosal was more specific: Legislators should keep an eye on issues beyond burning headlines. “We should not only concentrate on [investigating] corruption [in the government],” she said.

More than the procurement of weapons for the soldiers’ use, Rosal said, lawmakers should pay attention to “the morale and welfare of soldiers.”

Rollo and his team are doing their best to help distressed soldiers reintegrate into society through psychotherapy, medication and counseling. The staff also conducts group activities, such as sports festivals, Zumba workouts, their version of regional fiestas like Bacolod City’s Masskara, and trips to museums.

Then there is the Friday-afternoon no-alcohol “happy hour,” in which patients of an entire ward push back their beds to make way for a videoke machine and space to serve as a dance floor.

For a few hours between lunch and dinner, the soldiers take turns being a lovesick balladeer, a rakista, or a Pinoy Michael Jackson. After all, a song can do wonders to heal one’s spirit.