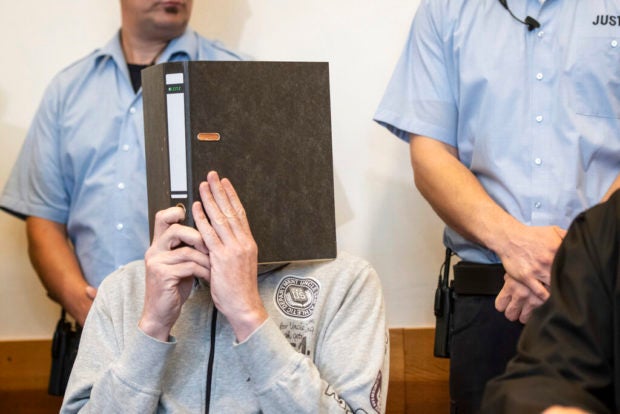 Defendant Andreas V. sits in the courtroom in Detmold, Germany, Thursday, Sept. 5, 2019. A court in western Germany has convicted two men of sexually assaulting children of hundreds counts for years at a campsite in Luegde, about 320 kilometers (200 miles) west of Berlin. The Detmold state court identified the men only as Andreas V., 56, and Mario S., 34, in line with Germany privacy laws. They were sentenced Thursday to 13 and 12 years in prison, respectively. AP

BERLIN — A court in western Germany convicted two men Thursday of sexually assaulting nearly three dozen children at a campsite over a period of years.

The Detmold state court identified the men only as Andreas V., 56, and Mario S., 34, in line with Germany privacy laws. They were sentenced Thursday to 13 and 12 years in prison, respectively.

The court labeled them both dangerous offenders, meaning they can be held indefinitely past their sentences.

“Today, like before, it’s difficult to put the acts into words,” Presiding Judge Anke Grudda said in her ruling, telling the court that words like “abominable, monstrous, repulsive” were not strong enough.

“You degraded 32 children and youths as objects of your sexual desires and destroyed 32 childhoods,” Grudda said.

Most of the crimes were committed in Andreas V.’s trailer and camping spot. The court convicted Andreas V. of 223 counts of sexual abuse and Mario S. of 48.

Prosecutors were able to prove that the men abused 32 boys and girls, including some still of kindergarten age, over a period of years, but the court said the actual number of victims was likely higher.

The men filmed their crimes, and prosecutors presented hundreds of confiscated photos and videos as evidence at the trial, which began at the end of June.

One victim was the foster daughter of Andreas V., who acted as a lure to help the two procure other victims, the dpa news agency reported.

“Even after 10 days of testimony I remain speechless,” Grudda said. /kga