Taliban suicide bombing kills 10 near US Embassy in Kabul 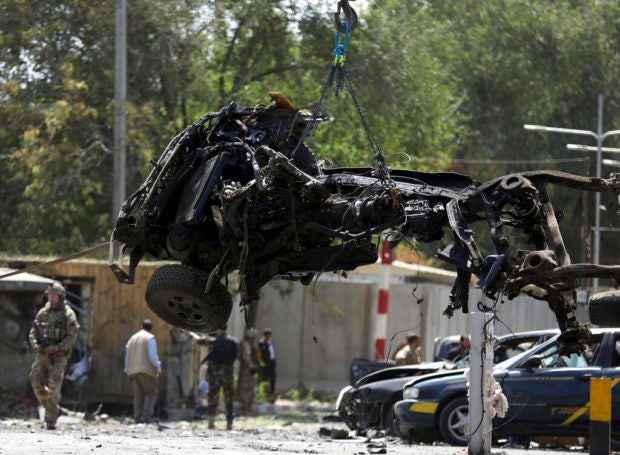 Resolute Support (RS) forces remove a destroyed vehicle after a car bomb explosion in Kabul, Afghanistan, Thursday, Sept. 5, 2019. The Afghan government says at least 10 civilians are dead and another 42 wounded after a Taliban suicide car bombing rocked the Afghan capital near a neighborhood housing the U.S. Embassy and the NATO Resolute Support mission. AP

KABUL, Afghanistan — A Taliban suicide car bomb rocked Kabul on Thursday, killing at least 10 civilians in a busy diplomatic area that includes the U.S. Embassy – the second such attack this week that underscored Afghan government warnings that a preliminary U.S.-Taliban deal on ending America’s longest war was moving dangerously quickly.

Interior Ministry spokesman Nasrat Rahimi said another 42 people were wounded and 12 vehicles destroyed in the explosion.

The Taliban said they targeted vehicles of “foreigners” as they tried to enter the heavily guarded Shashdarak area where Afghan national security authorities have offices. The NATO Resolute Support mission is nearby, and British soldiers were at the scene, retrieving what appeared to be the remains of a NATO vehicle. Neither the NATO mission nor the British high commission commented on the attack.

Footage widely shared on social media showed the suicide bomber’s vehicle turning into the checkpoint and exploding – and a passer-by trying to sprint away just seconds before.

“We all saw on security camera who were targeted!” presidential spokesman Sediq Seddiqi tweeted.

Once again, stunned civilians were the victims, though U.S. Ambassador John Bass in his condemnation of the attack said “members of security forces” were among the dead.

“I don’t know who brought us to the hospital and how,” said one of the wounded, Nezamuddin Khan, who was knocked unconscious and woke up in a local hospital.

The explosion at the checkpoint, which has been targeted in the past, follows a Taliban attack against a foreign compound late Monday that killed at least 16 people and wounded more than 100, almost all of them local civilians. An Associated Press reporter on the phone with the U.S. Embassy when Thursday’s blast occurred heard sirens begin blaring there.

U.S. envoy Zalmay Khalilzad has been in Kabul this week briefing the Afghan president and others on the U.S.-Taliban deal to end nearly 18 years of fighting that he says only needs President Donald Trump’s approval to become a reality. Khalilzad has not commented publicly on this week’s attacks.

The Afghan government has raised serious concerns about the deal, including in new comments on Thursday as the latest attack occurred. The agreement was moving with “excessive speed,” presidential adviser Waheed Omer told reporters, warning of difficult days ahead.

“Afghans have been bitten by this snake before,” Omer said, recalling past agreements from which, like now, the Afghan government has been sidelined. “Where there is no feeling of ownership there is no safety,” he said, though he emphasized that the government still sees the peace process as an opportunity.

The Taliban, at their strongest since their 2001 defeat by a U.S.-led invasion, have refused to negotiate with the government, calling it a U.S. puppet.

The Afghan government on Wednesday said it shares the concerns raised by several former U.S. ambassadors to Afghanistan, who warned that a full U.S. troop withdrawal that moves too quickly and without requiring the Taliban to meet certain conditions, such as reducing violence, could lead to “total civil war” such as the one that engulfed the country in the 1990s, before the Taliban swept into power.

Khalilzad has said 5,000 U.S. troops would withdraw from five bases in Afghanistan within 135 days of a final deal. Between 14,000 and 13,000 troops are currently in the country.

However, the Taliban want all of the approximately 20,000 U.S. and NATO troops out of Afghanistan immediately, while the U.S. seeks a withdrawal in phases that would depend on the Taliban meeting certain conditions, such as a reduction in violence.

The U.S. also seeks Taliban guarantees that they will not allow Afghanistan to become a haven from which extremist groups such as al-Qaida and the local affiliate of the Islamic State group can launch global attacks.

The deal is meant to be followed quickly by intra-Afghan talks that the U.S. would like to see begin ahead of Afghanistan’s presidential election on September 28.

Afghan President Ashraf Ghani, who has been shown the U.S.-Taliban deal but not allowed to keep a copy, has insisted that the election must not be delayed. He seeks a second term and what he calls a strong mandate to negotiate with the militant group on the country’s political future. He has rejected talk of an interim government, an idea that has gained such traction in Kabul that many other presidential candidates have barely campaigned.

Ghani’s adviser, Omer, acknowledged on Thursday the risks of holding another chaotic election after the presidential one in 2014 and last year’s parliamentary vote. He said the election must happen on time but said a vote that is not transparent will “cause challenges.” /kga

Read Next
De Oro council to firm up measure vs Red-tagging
EDITORS' PICK
Manila is 78th most expensive city in the world for foreign workers
TeaM Energy pushes development programs to help in pandemic rebound
Want to help local farmers? Shop small and eat Real Food
Piolo Pascual: The Ultimate Heartthrob continues to level up
ICC is everything but a court of ‘white people’
Garcia softens stance, meets IATF halfway on swab-upon-arrival policy
MOST READ
Sharon Cuneta on living in the US: ‘Nagagawa ko lahat ng normal na bagay’
ICC is everything but a court of ‘white people’
Duterte-Duterte tandem possible but ‘winnability is another question’ — Binay
More than 150,000 voters wiped off the registration list – Comelec
Don't miss out on the latest news and information.