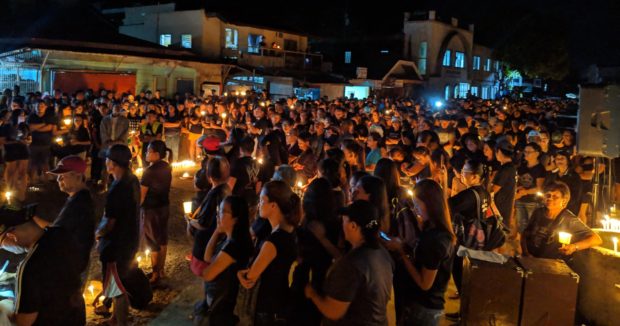 Guimaras residents lit candles to mark the first month after the August 3 accidents wherein 31 passengers died after three motorboats capsized at the Iloilo Strait. They also appealed for the resumption of normal operations of motorboats (Photo courtesy of Hugpong Guimarasnon)

ILOILO CITY –– Guimaras residents on Tuesday night marked the first month after the tragic boat mishaps at the Iloilo Strait.

They gathered at the Parola boat terminal in Iloilo City and in the ports of Buenavista and Jordan towns in Guimaras where they held simultaneous programs.

They lit candles and offered prayers for those who died after three motorboats capsized on August 3.

Thirty-one passengers of motorboats Chi-Chi and Jenny Vince were killed, while 52 passengers and 13 crew survived in the accidents considered the worst sea tragedy at the Iloilo Strait in recent memory.

The residents led by the Hugpong Guimarasnon also called on the Department of Transportation (DOTr) and other government agencies to allow the motorboats to resume normal travel operations.

“We are not against modernization but our main problem is now because we are suffering from the policies being imposed on us,” said Fred Davis, Hugpong Guimarasnon spokesperson.

Davis said their repeated appeals to government agencies “were not being heard.”

Davis said they were agreeable to some of the restrictions, including limiting the number of passengers of motorboats to 75 percent of its capacity.

He said trips of the passenger motorboats could also be regulated or stopped during bad weather.

But he said limiting the trips from 6 a.m. to 6 p.m. has severely affected the province’s economy and has burdened fixed earners and students.

He also lamented what he believed was an unwarranted suspension of trips even when sea conditions were normal.

“Businesses are losing because it is more expensive to transport products on (ferries) and fast craft vessels,” he said. 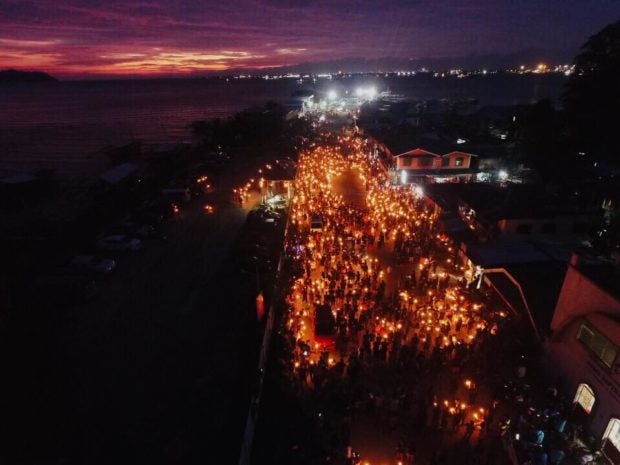 Guimaras residents lit candles to mark the first month after the August 3 accidents wherein 31 passengers died after three motorboats capsized at the Iloilo Strait. They also appealed for the resumption of normal operations of motorboats (Photo courtesy of Hugpong Guimarasnon)

The DOTr has allowed fast craft vessels to transport passengers going to and from Guimaras. But the fare at a minimum of P50 is much higher than the P15 fare of motorboats.

“Most of those traveling to Iloilo daily are students and employees who earn P300. If they take the fast craft vessels, they have to pay P100 daily for boat fare alone,” he said.

Davis said they have been appealing for the extension of the boat trips to at least 9 p.m.

“We are still recovering from the tragedy but the conditions being implemented are unfair and it seems we are the ones being punished,” he said.

He said many Guimarasnons blamed the high number of fatalities in the mishaps to the “failure in rescue operations and lack of rescue equipment” by the Coast Guard.

The Coast Guard denied that it did not respond immediately and adequately.

The agency had yet to release its findings on the investigation it conducted to determine the cause of the accidents and if any of its personnel would be held liable.

Davis said they were also opposing the total removal of tarpaulin covers that served as a protection against rain and heat.

The tarpaulin was seen as one of the reasons why the boats capsized after being hit by strong gusts of wind.

Davis said the tarpaulin cover could be stretched out over the boat with an opening at the sides to allow the wind to pass through.

He said government officials should consider the impact of their policies on Guimarasnons dependent on motorboats for their work, education, and livelihood.

“These policies are slowly killing us,” he said./lzb

Read Next
DOTr: Bulk of 2020 infra fund to go to railway sector
EDITORS' PICK
Unemployment rate up to 6% in May
House energy committee chair Arroyo bats for cheap electricity
High-risk pregnancy: Reducing your risk is in your hands
High inflation: Your P1 is now worth only 87 centavos
UK’s Boris Johnson will resign, BBC reports
Geek out at TOYCON 2022 powered by Smart Signature
MOST READ
Suspect in grisly killing of missing woman in Bulacan arrested
Kim Atienza’s daughter flaunts bikini body in response to critics of her ‘revealing photos’
Japanese artist who created ‘Yu-Gi-Oh!’ found dead in the sea
FDA probes popular Filipino noodle brand for ‘high level of ethylene oxide’
Don't miss out on the latest news and information.