Ebola survivors at higher risk of dying, even after recovery

LONDON  – A study that tracked over 1,000 Ebola survivors found they had a higher than usual chance of dying in the year after their recovery. Some health officials said the results suggest more should be done to monitor the health of survivors amid the ongoing outbreak in Congo. 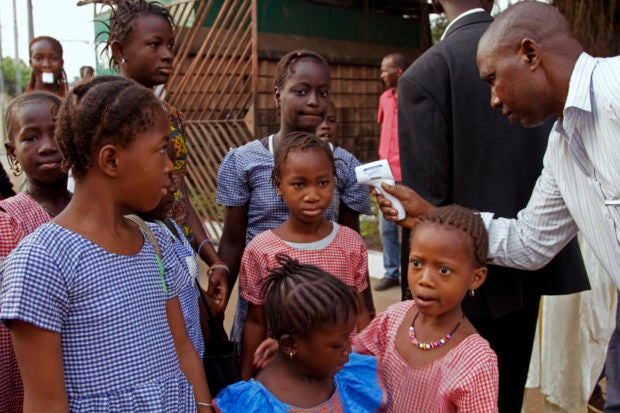 FILE – In this Monday, Jan. 19, 2015 file photo, a healthcare worker, right, takes the temperatures of school children for signs of the Ebola virus before they enter their school in the city of Conakry, Guinea. People who survive Ebola might have a higher chance of dying in the first year after being released from the hospital, in a new study published Wednesday, Sept. 4, 2019 that suggests more should be done to monitor the health of survivors amid the outbreak in Congo. Doctors gathered information for more than 1,000 people hospitalized for Ebola in Guinea after the West Africa epidemic. They found Ebola survivors had up to a five times higher chance of dying in the first year after their release when compared to the general public. (AP Photo/Youssouf Bah, file)

Researchers at the World Health Organization and elsewhere collected information about 1,130 people who were hospitalized with Ebola in Guinea during the 2014-16 West Africa epidemic. Of those survivors, 59 died, or about 5%. Nearly two-thirds reportedly had kidney problems that may have contributed to their deaths.

Compared to the general public, the survivors had a five times higher risk of dying in the first year after their release, the study reported.

With limited access to medical records, the researchers mostly relied on the memories of family members for when and how their relative died. But scientists say the findings could be relevant as the Ebola virus continues to spread in Congo and could prompt changes in how survivors are tracked.

“We know that with some infectious diseases, people are at higher risk of mortality after recovery. But we did not think this was the case with Ebola,” said Lorenzo Subissi, the paper’s senior author who did the work at the Belgian research institute Sciensano.

The study was published online Wednesday in the journal, Lancet Infectious Diseases.

Subissi said it was unclear if the survivor deaths in Guinea were due to a possible Ebola relapse or evidence of more lasting damage from their illness. He theorized that because Ebola can trigger a massive inflammation response, it could damage organs including the kidneys and liver.

Ebola is known to persist in certain parts of the body for months, long after people have recovered. There have been a small number of cases of Ebola “re-emerging” to cause other problems, including in a Scottish nurse who developed meningitis caused by Ebola hidden in her brain and an American physician who had lingering virus in his eye.

“We need to know more about how to support people once they leave the Ebola treatment clinics,” said Josie Golding, an epidemics expert at the British charity Wellcome Trust.

Golding, who was not part of the study, said that when some survivors are tested again later for Ebola virus, other health checks could be helpful — but she acknowledged that could be challenging in countries with weak health systems.

Subissi, who now works at the WHO, said a task force at the U.N. health agency is assessing the findings to determine whether strategies to monitor Ebola survivors should be changed.