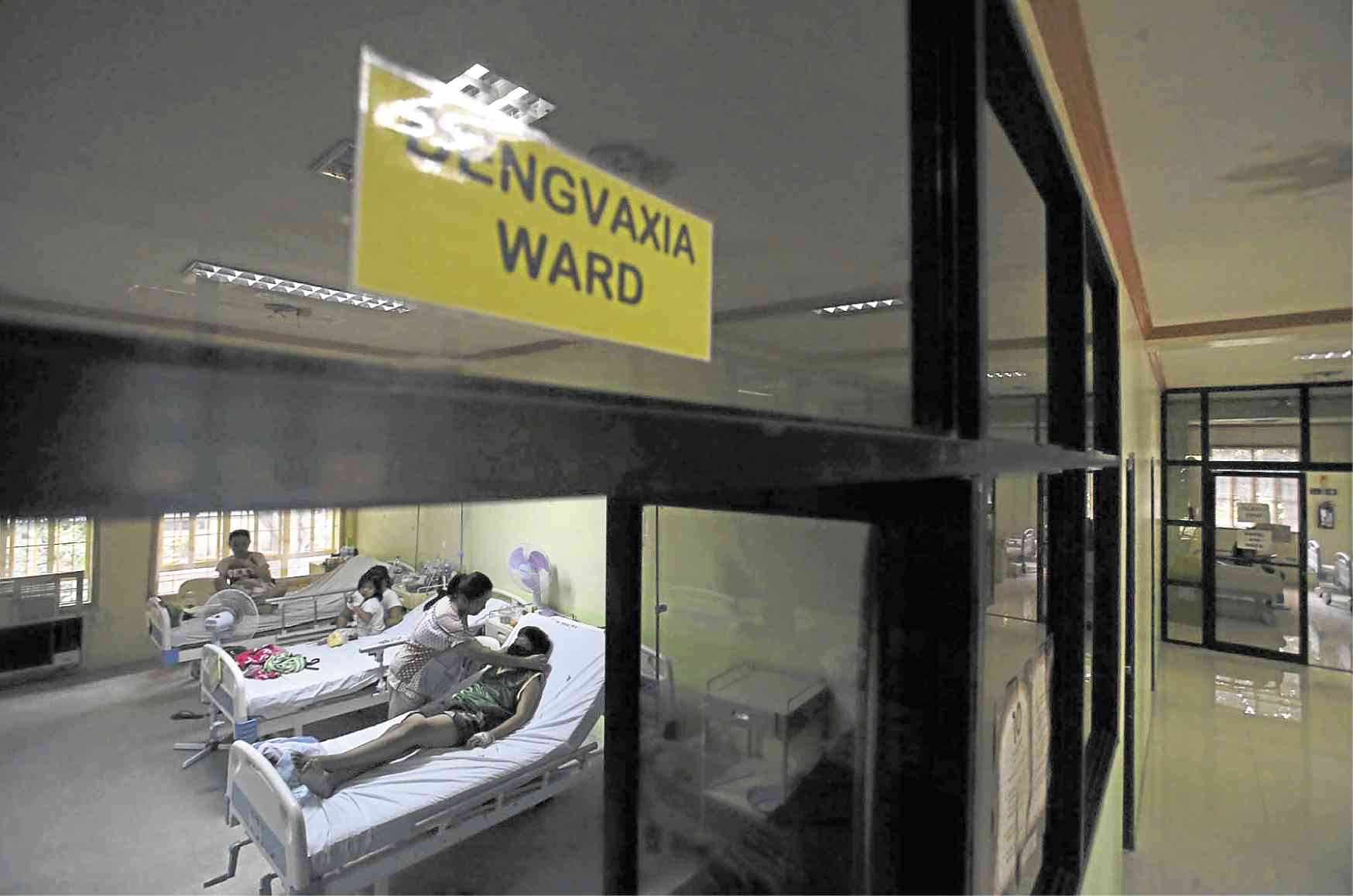 NAME RECALL An area for dengue patients at Gen. Emilio Aguinaldo Memorial Hospital in Trece Martires, Cavite province, is still called “Dengvaxia Ward” even though the dengue vaccine has been banned since 2017. Familieswho can afford it go abroad just to have their children inoculated with Dengvaxia, according to a group calling for the lifting of the ban. —LYN RILLON

MANILA, Philippines — Access to Dengvaxia has become a class marker of sorts in the Philippines.

With the dengue vaccine banned in the country, well-off Filipino parents are sending their kids to neighboring Southeast Asian countries so they can be vaccinated against the mosquito-borne disease.

Doctors for Truth and Public Welfare (DTPW) said on Wednesday that it was unfortunate that ensuring the “future protection” of kids against dengue was an option afforded only to rich families.

“We are now helping Filipinos who can afford it to get their dengue vaccines in Singapore. Imagine that? But those who cannot afford to travel to Singapore are deprived of the choice and chance of getting a vaccine that gives 93-percent protection,” DTPW coconvener Minguita Padilla said.

Dengvaxia is currently licensed in 20 countries, according to the World Health Organization.

In August the Department of Health (DOH) upheld the Food and Drug Administration’s (FDA) decision to revoke the vaccine’s certificate of product registration (CPR) after its maker, Sanofi Pasteur, failed to submit documents to prove that it was safe and effective for public use.

That left Singapore, Thailand and Indonesia as the only countries in Southeast Asia where Dengvaxia is available and administered to the public.

While they recognize that the vaccine is not a solution to the ongoing dengue epidemic, DTPW and nearly all of the country’s medical societies, led by the Philippine Medical Association (PMA), have urged the government to allow the use of Dengvaxia, especially for those who have had prior exposure to the virus.

PMA said the vaccine should be given to people who were interested, willing and aware of the benefits and possible risks of the vaccine.

“To deprive the citizens of this is to deprive us of a basic right,” Padilla said.

Health Secretary Francisco Duque III noted though that Sanofi could still apply for a new CPR, which he said could be processed within six months.

Most affected were children aged 5 to 9, who comprise nearly a quarter of all dengue cases and more than a third of all reported deaths.

In Singapore, those who have availed themselves of Dengvaxia shelled out nearly P9,800 for the testing for prior infection as well as for the first dose of the vaccine, according to Padilla.

She said a family’s expenses for getting the vaccination would easily rise to an additional P15,000 when the airfare and accommodation for the child and a parent were included.

While she could not provide the exact number of people who sought the vaccine abroad due to doctor-patient confidentiality, Padilla said this may well be in the “hundreds.”

Her estimate was based on feedback her group had received from doctors making the arrangements with Singaporean colleagues for their patients.

Padilla reminded parents who had their kids vaccinated abroad to inform their doctors of the vaccination and immediately report to them should an adverse reaction occur.

She appealed to these families not to smuggle into the country the second and third doses of the vaccine just to save on costs.

“Among many reasons, the cold-chain process is quite critical, and if not maintained, will destroy the effectivity of the vaccine,” she said.

Nearly two years since Dengvaxia was included in the government’s mass immunization program, the DOH halted the use of the vaccine following Sanofi’s admission in November 2017 that this may cause severe dengue in people who had yet to be exposed to the virus.

But studies showed that about 90 percent of Filipino children were already positive for dengue by the time they reach 9 years old, the minimum age for the vaccine to be administered, according to Padilla.

“Most have had subclinical dengue or had fever not diagnosed as dengue. That’s how hyperendemic our country is,” she said.

Nonetheless, this didn’t stop fear-mongers like the Public Attorney’s Office (PAO) from blaming Dengvaxia for the deaths of schoolchildren who had been inoculated with the vaccine.

The PAO’s campaign caused parents to refuse to have their kids immunized for other vaccine-preventable diseases, like measles.

The DOH would later confirm that no one had died due directly to Dengvaxia.

Early this year, the FDA permanently banned the sale and use of Dengvaxia after Sanofi’s failure to submit postmarketing authorization requirements showing that the product was safe and effective for public use.

Duque agreed with the FDA decision last month, without prejudice to the

Sanofi said it had “no specific next step yet” as it was still studying all options.

Jean-Antoine Zinsou, Sanofi Pasteur Philippines’ general manager, maintained though that the company had not been remiss in complying with “all the requirements.”

He said the pharmaceutical company had provided the government with data on the safety and efficacy of Dengvaxia and that these had been shared “with all the regulatory authorities where we submitted our registration.”

He admitted, however, that data on the vaccine’s effectiveness and assessment of its safety were not available yet because Sanofi would need time to assess its effectiveness.

He added that the assessment would take around three years.