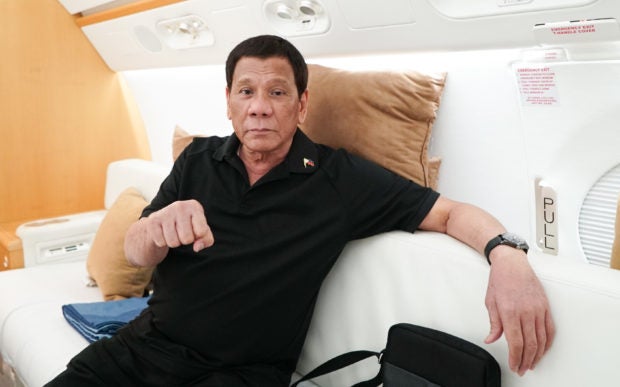 President Rodrigo Roa Duterte flashes his signature pose while on a plane bound for the People’s Republic of China at the Villamor Air Base in Pasay City on August 28, 2019. (Photo by KING RODRIGUEZ / Presidential Photographers Division)

“If you do not, then beginning at this hour, you are a fugitive from justice. And you will be treated as a criminal who is evading the law and well you know things can go wrong,” the President said in a press briefing in Malacañang.

He said the released convicts for the rape-slay of the Chiong sisters should also surrender, saying there might be corruption in their release.

“The records rather would show that there has been a wrong committed and maybe corruption,” he said.

“Given the propensity of the 1,700, including those who killed the Chiong sisters and Sanchez… those who are [in] high-profile [cases] whom people are angry at, I’m angry,” he said, partly in Filipino.

He said he was giving the released convicts 15 days to surrender to the nearest police station or military camp.

“If I were you, I would surrender to the nearest police or military detachment wherever you are now because I do not need to have a warrant,” he said. “I will just order them and I take full responsibility for this. And all the consequences connected with this decision will be mine and mine alone.”

He said he was ready to be investigated or be impeached for his order.

“I am ready to be investigated and I’m ready for impeachment. And I’m ready to resign if warranted. But that is my decision and that is mine and mine alone. So anybody acting upon my orders will be treated as exercising good faith,” he said.

The President added that he was considering putting up a P1 million bounty on the head of each released convict to anyone who could get them dead or alive.

He said he had ordered Finance Secretary Carlos Dominquez III to look into possible sources for the money.