MANILA, Philippines — The slash in the proposed budget of the Department of Labor and Employment (DOLE) will hurt the agency’s programs for overseas Filipino workers (OFWs), displaced workers, students, and child workers among others, Labor Sec. Silvestre Bello III said Wednesday.

During DOLE’s budget defense before the House appropriations committee, Bello said their proposed budget for 2020 under the National Expenditure Program which was approved by the Department of Budget and Management (DBM) was P14.4 billion, or 12 percent lower than 2019’s P16.4 billion budget.

DOLE had originally requested a budget of P20 billion, according to Bello.

Bello said their maintenance and other operating expenses (MOOE) got the biggest cut of 20 percent from this year’s P10.6 billion to P8.5 billion for 2020. 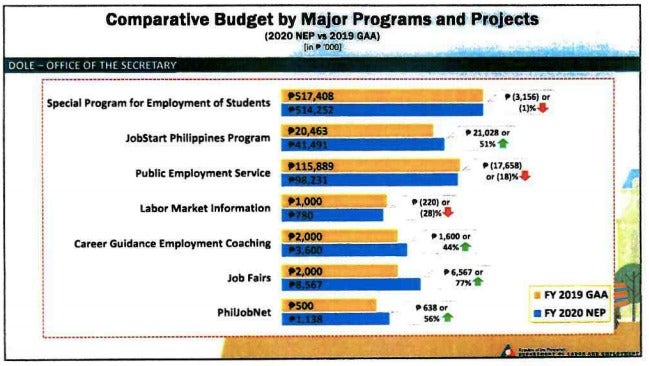 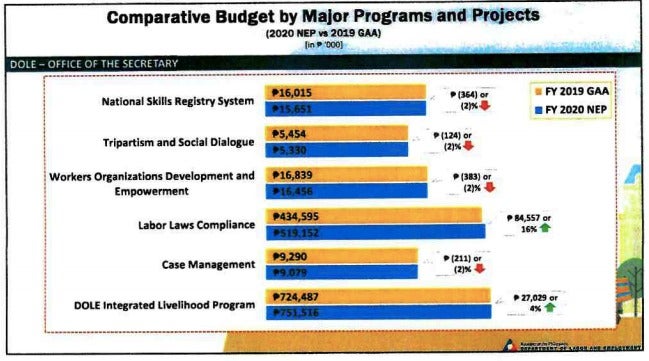 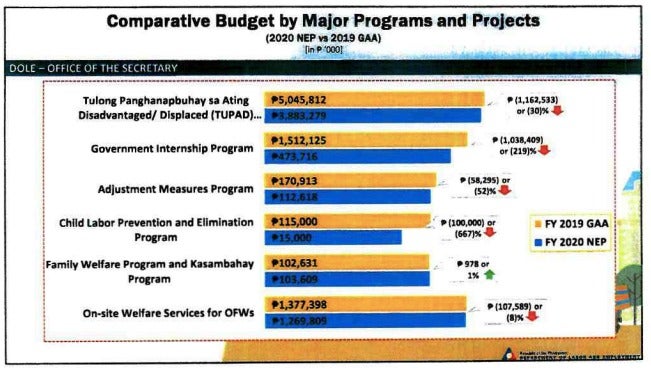 “Ang sinasbi nila your honor, is ‘yung absorptive capacity namin. But we are proven by our track record your honor that our utilization is 92% your honor,” he added.

Of DOLE’s programs, the child labor prevention and elimination program got the biggest decrease of 667 percent from P115 million budget in 2019 to P15 million for 2020.

“With all due respect to our DBM, I think our department deserves more especially considering that our department operation is contributing a lot in terms of the economic condition of our country…” Bello argued.

Bello said they would prioritize to restore the budget for their overseas operations, and the Tupad and GIP programs.

“We will be guided accordingly with this and I support the proposal of my colleagues here to increase the budget of the DOLE from P14 billion to P18.5 billion for 2020,” Baguio Rep. Mark Go said.  /muf