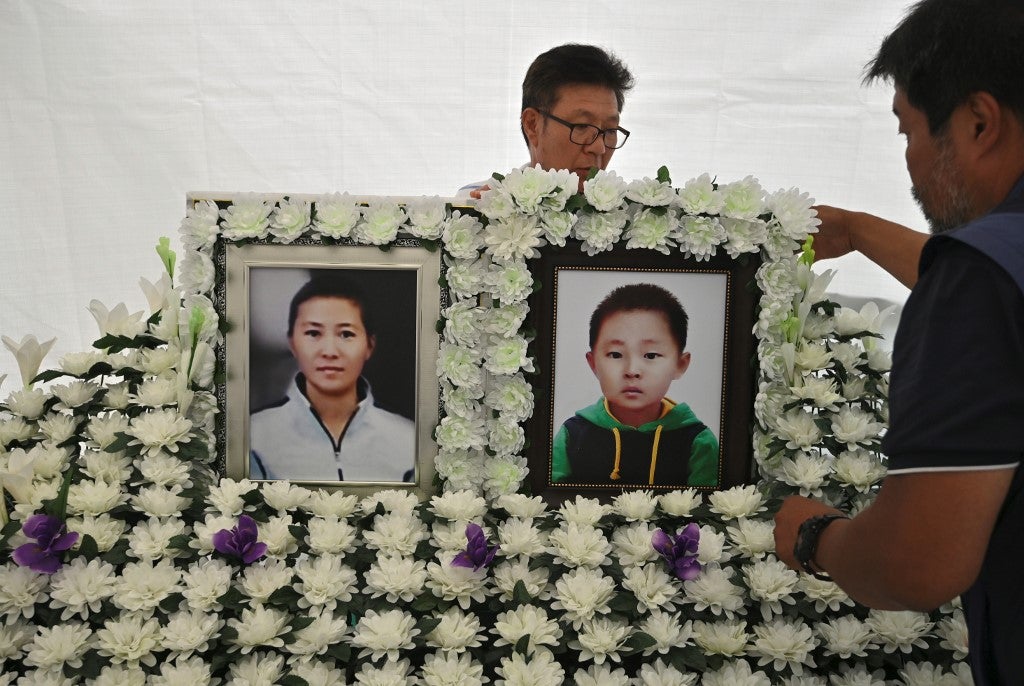 This picture taken on August 28, 2019 shows a man setting up portraits of late North Korean defector Han Sung-ok and her six-year-old son, who are believed to have died from starvation, at a makeshift shrine for Han and her son in downtown Seoul. – Han struggled to hold on to a job while caring for her son and the pair were found two months after their death in their apartment along with an empty bottle of soy sauce. (Photo by Jung Yeon-je / AFP)

SEOUL — When Lim reached South Korea, she thought she had left behind the miseries of poverty and an unwanted marriage for a better life with her daughter.

She is one of more than 33,000 North Koreans — the vast majority of them women — who have fled to the South from hardship and repression in their homeland, where the Kim dynasty has ruled with an iron fist for three generations and stands accused of widespread human rights abuses.

The transition to a radically different, democratic and capitalist society — while juggling work, school and motherhood — is not easy. “Life in South Korea was the complete opposite of what I had expected,” Lim said.

Nine years after arriving she still struggles to make ends meet, one of hundreds of North Korean single mothers in similar situations.

Their plight was highlighted by the case of Han Sung-ok, who had difficulties keeping jobs while caring for her epileptic six-year-old son. Their bodies were found in a Seoul flat two months after they are believed to have died from starvation.

News of the deaths sent shockwaves across the country last month and triggered an unprecedented campaign by the defector community urging Seoul to overhaul its aid programme for North Korean refugees.

“Han fled North Korea, where scores of people die from starvation, only to starve to death in South Korea,” said campaigner Heo Kwang-il.

The vast majority of North Korean migrants go first to neighbouring China before making their way to the South.

As the oldest daughter, Lim — who asked to be identified by her surname only — left home at 24 to provide for her family but like many others was trafficked and sold to an abusive Chinese man, with whom she had a child.

After four years of what she described as “imprisonment”, Lim ran away with her toddler daughter to Seoul.

At first, she took odd jobs but with no one to help look after her daughter, Lim was forced at one point to put her into care and contemplated suicide, tormented by the guilt of not being able to provide fully for her child or her family in the North.

At times she doubted her decision. “Sometimes, I wanted to go back to North Korea,” she told AFP in her tiny flat.

Nowadays, she works as a waitress and is sometimes able to send money to her family in the North via intermediaries, and has no regrets — but it has taken time.

Life in South Korea is riddled with cultural and economic challenges for all new arrivals from its neighbour — the two have been divided since the Korean War fighting stopped in 1953. But single mothers face further complications without a family support network.

“When they have to take care of a child, they end up seeking part-time, unstable jobs,” said Kim Sung-kyung, a professor at the University of North Korean Studies.

“This starts a vicious cycle that holds them back from adjusting financially or finding stability.”

The South Korean government provides newly arrived defectors a lump sum of around 8 million won ($6,600) to help them settle.

They can seek additional aid but some give up, saying the system is too complex — especially if their education in the North has left them with limited literacy.

Media reports say Han had sought help but was turned back by a district official who demanded legal papers to prove her status, which she could not provide.

“People come to the democratic South with the ‘Korean Dream'” but many end up suffering from depression and other illnesses, said Lee Na-kyung, a defector activist for single parents and people with disabilities from the North.

Lee arrived with her husband — who has a disability — and their son in 2006 but was soon homeless after spending all their money on medical treatment.

She calls herself a “rare success story”, saying her aggressive personality helped her settle in her new home, where she first worked as a gas meter reader and later became a humanities instructor.

The state has a pervasive role in North Korean society, where authorities impose extensive controls over individuals’ lives, in marked contrast to the more individualistic South.

Many single mothers who come to the South “have no one to talk to and they feel cut off from the world,” Lee said.

“They say even if they were poor in the North, they never felt isolated.”