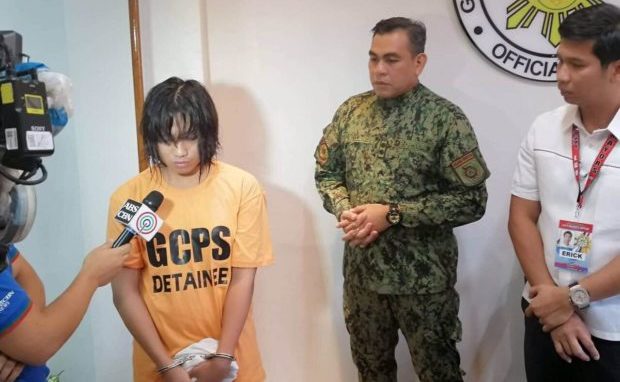 Richard Bernades, the suspect in the kidnapping of a newborn baby in a government birthing center in Gingoog City, Cagayan de Oro, answer queries from the media after his arrest on Monday, September 2, 2019. (Photo from Gingoog City Police)

MANILA, Philippines — Police have arrested the suspect in the kidnapping of a newborn baby in a government birthing center in Gingoog City in Misamis Oriental.

Initially, investigators thought that the suspect was a woman believed to be around 57 to 63 years old as spotted in a footage of a closed-circuit television camera installed near the birthing center and based from accounts of witnesses.

But according to Lt. Col. Mardy Hortillosa II, PRO 10 spokesperson, the suspect was a gay man sporting long hair.

[He wants to have a child. That’s what he said.]

Bernades was arrested at about 8:30 p.m. on Monday in his house in Barangay 19 after a concerned citizen informed the police of the possible identity of the suspect.

Santiago said that around two hours before the suspect’s arrest, a couple heard the cries of a baby from an abandoned house near their pig fence and brought her to the Gingoog City Police Station.

Police then learned that she was the same child reported to be missing by her mother, Marichu Tolorio Villegas.

According to Hortillosa, the suspect, whom he said had admitted to the abduction, left the child in the abandoned house out of fear.

Investigation showed that Villegas delivered the baby around 8:30 p.m. on Saturday but woke up with her child already missing the next day.

The Gingoog City Police immediately conducted an investigation and released a sketch of the kidnapper with the help of the CCTV footage and accounts from witnesses.

The suspect was brought to Gingoog City Police Station. A case of kidnapping and serious illegal detention was filed against him, according to Hortillosa. /je