Bangsamoro region now has its own flag 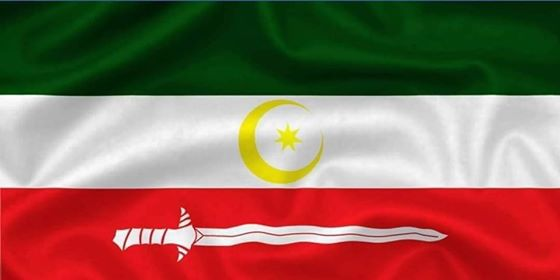 COTABATO CITY – The Bangsamoro Transition Authority (BTA), the interim government of the newly created autonomous territory, has the official flag of the Bangsamoro region.

The interim parliament approved the measure on August 23, and interim Chief Minister Ahod Ebrahim signed it on August 28, the first legislation that he signed into law.

Ebrahim, himself, proposed the legislation.

It also contains a crescent, a seven-rayed star, and a Kris, the signature Moro sword.

The flag is divided into three major stripes or segments.

Bangsamoro Interior Minister Naguib Sinarimbo said the green color on top of the flag reflects Islamic teachings and principles; white in the middle signifies peace, Sakina or tranquility, and righteousness; and red at the bottom represents the fallen mujahideens or freedom fighters who fought for the recognition of the identity and self-determination of the Bangsamoro people.

Sinarimbo added that the seven-rayed star represents the provinces of Maguindanao, Lanao Del Sur, Sulu, Tawi-tawi, Basilan, Cotabato City and the 63 barangays in Cotabato province that are now part of Bangsamoro region.

The white Kris in the middle of the flag’s red segment symbolizes the resistance of the Bangsamoro people and indigenous peoples in Mindanao against tyranny, oppression, and injustices, Sinarimbo said.

The new regional law mandates that the Bangsamoro flag shall be hoisted alongside the Philippine flag.

With a new flag adopted, the old regional flag that was the emblem of the now defunct Autonomous Region in Muslim Mindanao was consigned to the Bangsamoro museum. /tsb

Read Next
Missing phone, sim card? Sanchez’s wife may be ‘hiding something’ – Drilon
EDITORS' PICK
NBI, Immigration to join hunt for ‘underground’ medical clinics
Duterte approves Metro Manila’s shift to GCQ starting June 1
SM prepares for ‘safe malling’
2 Chinese nationals arrested in raid on another unlicensed COVID-19 hospital in Pampanga
Notice of 2020 regular meeting of stockholders June 18, 2020
Leveling up your ‘lutong bahay’ with the kitchen companion you never knew you needed
MOST READ
Duterte approves Metro Manila’s shift to GCQ starting June 1
Revillame tells Roque: ABS-CBN is in my heart despite being in rival network
NCR is ready for GCQ — Palace
Duterte: No reason for Richard Gomez not to accept healthy returning Ormoc residents
Don't miss out on the latest news and information.