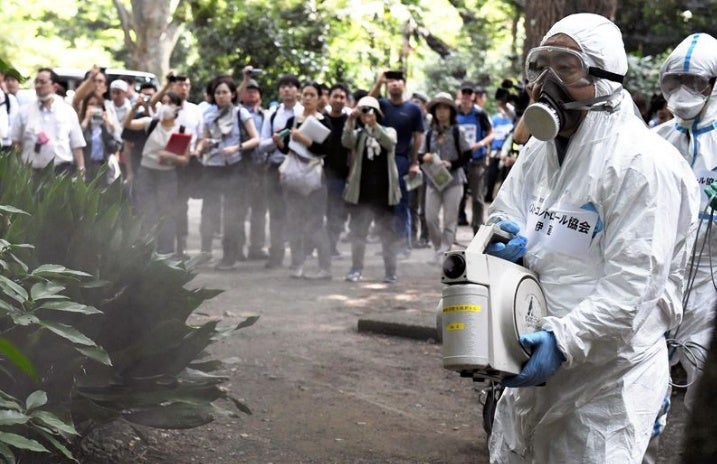 TOKYO — As part of preparations for the 2020 Tokyo Olympics and Paralympics, disaster training was conducted at the Shinjuku Gyoen National Garden in Tokyo on Monday in a scenario where the dengue virus had been detected in mosquitoes.

Monday was the usual weekly closing day of Shinjuku Gyoen, and about 160 people, including staff from the National Institute of Infectious Diseases, participated in the training. During the exercise, they used a method called “human decoy,” in which a person stands in place for eight minutes to attract mosquitoes. They then sprayed insecticide around mosquito concentration points to confirm whether insects would be eliminated.

Dengue causes fever, headache and joint pain three to seven days after being bitten by a mosquito carrying the virus. In rare cases, the disease is severe and life threatening.

Dengue fever is common in the Philippines and Malaysia and has resulted in some deaths. In 2014, for the first time in 69 years in Japan, people without travel histories to these countries became infected with the virus. Dengue virus was detected in mosquitoes collected in parks in Tokyo, but has not been detected in mosquitoes in Japan since then.