BUENOS AIRES, Argentina  – Restrictions on access to dollars took effect in Argentina on Monday as the government tries to control a rapid loss of foreign reserves and an accelerating devaluation of the currency. 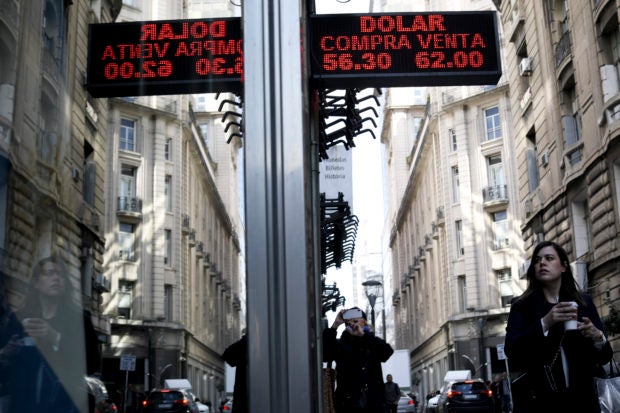 A woman walks under a sign showing exchange rates between the US dollar and Argentine peso in Buenos Aires, Argentina, Monday, Sept. 2, 2019. Argentina’s government decreed on Sunday that Argentines will need authorization from the central bank for the rest of the year to buy U.S. dollars in some cases and make transfers abroad as it tries to prop up its peso currency, following a peso devaluation and ahead of an Oct. 27 election. (AP Photo/Natacha Pisarenko)

The measure says residents can’t buy more than $10,000 a month without permission from the Central Bank. Institutions need permission for lesser sums. It also says that dollars earned for exports should be brought into the company within five days of the time they are paid. Importers also need permission to make payments.

The measures are far less restrictive than those imposed by the government of former President Cristina Fernández, which restricted even spending on vacations abroad and taxed credit card transactions in dollars, leading to the rise of a currency black market.

But they still alarmed many Argentines who recall past crises, and lines formed outside several banks in the capital.

President Mauricio Macri’s government imposed the measures after a first stage of voting showed the left-leaning presidential candidate Alberto Fernández far ahead of the conservative incumbent, scaring many investors and sending the country’s currency and stock market plunging.