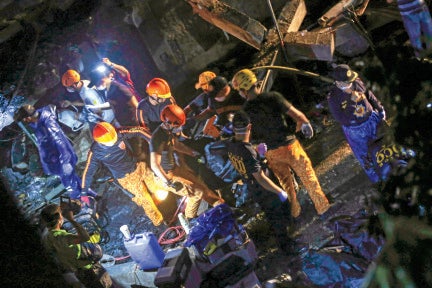 TRAGEDY Rescuers retrieve a body from the crash site. RICHARD A. REYES

SAN PEDRO CITY, Laguna, Philippines — Air crash investigators were set to “reconstruct” the light medevac (medical evacuation) aircraft that crashed into a resort in Laguna province on Sunday, killing all nine people onboard, including the New Zealander patient it was supposed to transport to Manila.

On Monday, police in Calamba City, Laguna, recovered the black box and turned over the audio recording to the air crash investigation division of the Civil Aviation Authority of the Philippines (Caap).

The Caap would then take over the investigation, which its spokesperson, Eric Apolonio, said might take a while.

He said in a phone interview that reconstructing the aircraft would be a “tedious” process.

The Inquirer on Monday tried to seek comments from the aircraft operator, Lionair, but the company had yet to issue a statement.

The airline’s lawyer, Lester Ople, has yet to respond to the Inquirer’s requests for an interview, but he earlier told reporters that the company was willing to shoulder the funeral expenses of the victims.

Malinao said the plane, which left Dipolog City airport at 1:40 p.m. on Sunday, crashed into the Agojo resort, a private pool, and damaged the wall of another resort in Pansol.

He said it just happened that Agojo did not have guests at the time although the crash injured its caretaker, Malou Roca, and her 19-year-old son, John Rey.

“The son escaped by diving into the pool of the adjacent resort,” Malinao said.

Dan Patrick Arcega, who happened to be a guest in a nearby resort, recalled hearing a “loud noise” similar to an engine failing, shortly before he and others saw the plane crash.